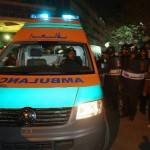 A car bomb detonated by Barack Obama’s friends, the Muslim Brotherhood, killed 14 people, mostly police, and injured 60 others when they blew up a police station in Mansoura Egypt. More Muslims killing Muslims. There’s your war on Islam for you. Muslims in Egypt and Syria are killing Christians with abandon as well. As hateful as they are, sucks to be them.

And as you can tell by their silence, our President Obama, Sec. of State Kerry, and National Security Advisor Susan Rice, have no problem with it. You see, it wasn’t democratic rule Obama was looking for back before the Muslim Spring turned to winter. He wanted, and allowed, the Muslim Brotherhood to take over.

The bombing comes just weeks before Egypt holds a referendum on a new constitution that is billed by the country’s military-installed authorities as the first step towards democratic rule after the army ousted Islamist president Mohamed Morsi in July.