You know how you can tell when a president who despises America and its veterans is in his second term? When he completely blows off the anniversary of the attack on Pearl Harbor, December 7, 1941. Leave it to President Barack Hussein Obama to prove President Franklin Delano Roosevelt wrong when he declared December 7th as “A Date Which Will Live in Infamy.”

The White House website’s list of Statements and Releases shows no mention of it. See screen capture and video below: 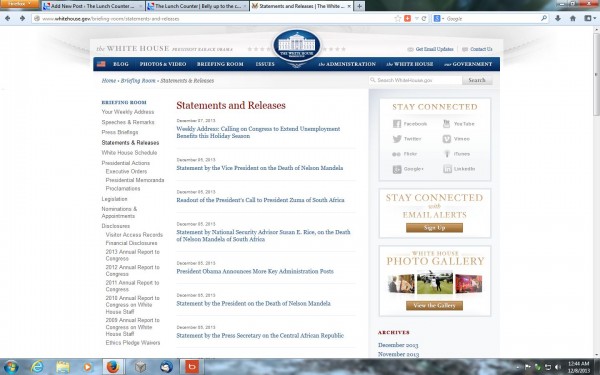 Instead, he calls on Congress to extend unemployment compensation benefits. You know, that one-year, temporary extension, that he has done every year for the last five years. A sure sign the Obama economy is on the rebound. What?

And as a testament on just how lousy the Obama economy is, in his own words, listen for his big closer at the end of the video.

So this holiday season, let’s give our fellow Americans who are desperately looking for work the help they need to keep on looking.

He acknowledges that fellow Americans are desperate. Desperately looking for work. But refuses to acknowledge that it’s because of his policies that they’ve been this desperate for this long.