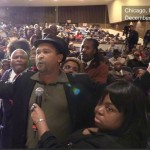 Having felt the heat long enough, Chicagoans are finally seeing the light. Rev. Al Sharpton went to Chicago to discuss gun violence. But the people had something to say that the he never anticipated and, not surprisingly, the media is not covering.

Here are a few choice quotes from the video:

All I can add to this is, welcome brothers and sisters. Voting differently is the way out of the malaise, the crime, and government dependency.