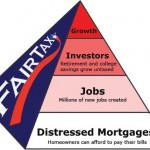 The FairTax plan is a comprehensive proposal that replaces all federal income and payroll based taxes with an integrated approach including a progressive national retail sales tax, a prebate to make sure no American pays federal taxes on spending up to the poverty level, dollar-for-dollar federal revenue neutrality, and, through companion legislation, the repeal of the 16th Amendment.

Do yourself a favor and get educated on The Fair Tax. The Fair Tax is the result of $22 million worth of research by credible economists from around the country whose task was to come up with another way to fund the operations of the country. The task was qualified to the extent that the result would be ‘revenue neutral.’ That is to say the system must be able to generate as much money as the government is currently generating with the current system through federal personal and corporate income taxes, gift, estate, capital gains, alternative minimum, Social Security, Medicare, and self-employment taxes, all of which would be replaced by the Fair Tax. And from that point as the economy grows, so grows the treasury. It is a pro-growth, as opposed to punitive growth, taxing system.

Consequences paramount to converting to the Fair Tax system are three-fold.

First, your individual take-home pay increases dramatically. Without the federal withholding and payroll taxes being deducted from your pay, you get all your pay in every paycheck. This alone is the biggest stimulus to your personal economy as well as our national economy. And it doesn’t put the nation further into debt in the process. Because the taxing revenue is generated by consumption, the tax base includes everyone who buys anything new, not just the working people in America. ‘Everyone’ includes citizens and non-citizens including illegals, foreign diplomats and tourists. And because it is a sales tax, the so-called underground economies are no longer exempt from contributing. Everyone will contribute to funding the government and our Social Security, Medicare and other entitlement programs.

Secondly, it takes the ‘tax hammer’ away from politicians who use it to control every aspect of our lives and business and industry in the United States. It transfers the power from Washington politicians directly back to you. It is this stripping of power from the political class that generates the most objection from the political class, and the most outrageous criticism and unfair demagoguery, of the Fair Tax. Under the Fair Tax, our politicians will be left with nothing to do except their job of governing and living within their means, just like you and I have to do. And since filing of your personal income taxes will cease, April 15th becomes just another day to enjoy life, liberty, and the pursuit of happiness.

While it is still fresh in your memory, take a look back at the presidential campaign and the amount of press and attention that was given to taxation by both candidates. Besides energy, the other topic was ‘my tax plan is better than your tax plan.’ And polarizing political tactics like class envy and class warfare became all too prominent. Absent tax laws to talk about, the voters would have learned more about the candidates and ‘the real issues.’

Third, but certainly not last, the change to the Fair Tax alone would bring back foreign-held capital, estimated at between $10 to $15 trillion, that economists predict will flow into the US economy with enactment of the FairTax. That is trillions of dollars of business that has fled this country because of its taxing system, the second highest in the world. As an added bonus, companies looking to do business in the United States that have not yet come here, would have the incentive to come here. The job creation and wealth creation associated with it will spur the economy more than any tax-and-spending Democrat or Republican in Washington could dream of. 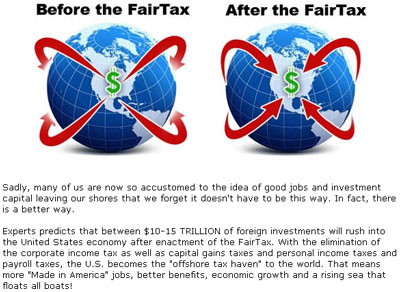