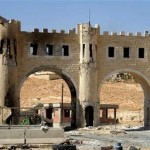 A suicide bomber blew himself up in central Damascus Tuesday and killed four people, the state media said, while a Syrian mother superior accused opposition fighters of abducting 12 nuns from a predominantly Christian village near the capital.