While the country is pondering how just about everything that President Obama has told us he was going to do, like, “I will not rest until everyone that wants a job can get a job” and the promises about how wonderful the ACA (Obamacare) will be if we would pass it into law, has not come to fruition. The latest distraction from the lousy economy, no jobs, and a failing Obamacare, is Promise Zones. Like anyone can trust the man who can’t do the right thing to create jobs for everyone can now somehow do something that will turn around local economies on a micro level.

So it occurred to me, what we have in The White House is a Commander In Promise. But that sounds a little, um, insensitive. But, where this guy is concerned, it wouldn’t surprise me one bit if he were to come up with a new cabinet department. What better excuse to grow government even further than to have a Department of Promise. Who the Promise Secretary would be is anyone’s guess.

Here’s a little ditty about how the media covers things that they think will benefit their president and his party, and how they don’t cover things that won’t.

Mainstream media stories and coverage on two news issues. You decide if there’s a bias or not.

As a comparison over the last six months, NBC featured a scant five seconds on updating the IRS story. CBS responded with a minute and 41 seconds. ABC produced a meager 22 seconds. 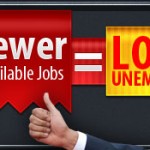 The Lunch Counter has documented over and over how the unemployment numbers are phony, in that they don’t mean that more people are working as that percentage goes down. The Left and its compliant media don’t know, or won’t tell you, that the reason the percent of unemployment is dropping is not because more people are working but because more people gave up looking for work (in Obama’s depressed economy) than found jobs. The labor force participation fell 347,000 from Nov 2013 to Dec 2013. When the unemployment rate declines, we want to see both employment and participation increase as discouraged workers return to the labor force. Today, we got the former, but not the latter.

It will be interesting to see how the Administration spins the drop in unemployment rate and the jobless recovery. What do I mean by “jobless recovery” when 74,000 jobs were created in December 2013? When you consider that about 250,000 jobs need to be created each month just to break even with population growth and retirement turnover, we’re going in the wrong direction, and have been for years.

Next time you hear someone tout the good unemployment numbers, ask them how the unemployment percent goes down when fewer people are working than at any time since the Jimmy Carter era. In terms of jobs and employment, President Obama is Jimmy Carter’s second term.

The BLS keeps track of total, as in real, unemployment which they call the U-6. This number includes people they quit counting that causes the published unemployment “rate” to go down. That’s the figure The White House shamelessly champions to say how the recovery is real yet “not as good as we’d like.” The U-6 unemployment percentage is 13%. (see table A-15)