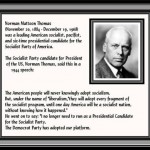 In a way to better understand why we are where we are (going down the tubes) in America today, you need to understand the mindset and philosophy of the people leading the charge. President Obama wasn’t the first “leader” to call for fundamental change.

Here’s a quick quiz.  Below are nine quotes, two each from Vladimir Lenin, Joseph Stalin, Barack Obama, and Hillary Clinton, and one bonus quote where you name who said it. Hint, the bonus quote belongs to none of the above.

Which quote belongs to who?

For more quotes from the fab four, follow the In Their Own Words link below.

Links: In Their Own Words: Lenin, Stalin, Obama, and Hillary | Bill Ayers To Teachers, It’s A ‘Movement’