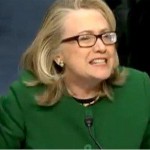 According to news reporting for the last week, the big and only question is about Gov. Chris Christie. Can he survive Bridge Gate. The main reason for their concern is that Christie is the only Republican that, according to polls, beats Hillary Clinton in a hypothetical presidential race.

Yesterday and today, the House and Senate Intelligence Committees declassified some of their findings on the massacre at Benghazi and revealed what everyone knew but President Obama, Sec. of State Hillary Clinton, and U.N. Ambassador Susan Rice lied about. For weeks. Only now it’s not a right-wing talking point to call them liars. Now, it’s a confirmed fact.

The last bullet point exposes something that isn’t getting any media attention. That this administration has cultivated a climate of loyalty that trumps the truth. Where leaders under the president, Bob Gates included, will allow things of this nature to go on unchallenged. From committing troops in harms way for political instead of national security reasons, and flat-out lying to the American people, shows an unhealthy climate in the administration. Unhealthy for our form of government that depends on our leaders being trusted to tell us the truth. If the American people can’t trust their own government, why should our allies?

In a most amazing audio of then Senator Clinton in 2001 and 2002, in the investigation into the first 9/11 attack, the one in 2001, former Secretary of State Clinton seems to have changed her tune for the second 9/11 attack. Under President Bush, it made a difference. Under President Obama and her as Secretary of State? Not so much. Give a listen.

H/T to Roger Hedgecock for airing this audio on his radio show today.

Because they were an accomplice, the media is maintaining their blackout as the New York Times covers for Mrs. Clinton. They could do something to save themselves from total irrelevancy if they would ask the obvious question. Can Hillary survive Benghazi? All they have to do is their job, and play this audio, and send Hillary to the home for presidential candidate also-rans. Even they can’t change Hillary’s testimony from twelve, thirteen years ago.

We have an opportunity to fix America’s broken immigration system, grow our economy, and give undocumented youth and their families the chance to earn their citizenship.

Here’s a clue Barack ol buddy. You’ve had the opportunity to do something to grow our economy via private sector jobs, not by growing government with handouts and dependency programs, for 5 years now. And there’s nothing wrong with the immigration laws we already have. What’s wrong is you won’t enforce them.

You continue to amaze me with your criticism of all that is wrong in our country. Everything you are responsible for; high unemployment (U-6 at 13%), lowest worker participation rate since the Carter era, falling family incomes, and all the above hurting Blacks more than any other demographic, as if you are a bystander. The conditions you criticize are valid. But you are the one responsible for all of it. You and your policies are the problem.

Have you ever been accused of being one of those “enemies from within?” As in “foreign and domestic?” You sir, are one of the domestic ones. You make that real clear by the way you make your own laws, and break your own laws, and rule, like a dictator, to get around Congress. As if there is only one branch of government now. And, you use the power of government, the DOJ, IRS, and Treasury, to target your political enemies.

And especially your hissy fit today at your Cabinet meeting when you threatened to rule by executive order. Fidelity to the Constitution doesn’t mean to circumvent it. You, of all people, should know. I’m told you were a Constitutional Professor, as if that’s supposed to mean something. That doesn’t give you the authority to ignore it. You hate our Constitution and refuse to protect and defend it. Your oath didn’t mean to make sure the Smithsonian Institute doesn’t burn down (where the Constitution is archived). That’s not the kind of protecting and defending your oath means. I’m sure you would feel more at home in Venezuela, Cuba, or Egypt, running the streets with the Muslim Brotherhood. Sucks to be you for being responsible for a country you despise.

So I ask you Mr. President, former Constitutional professor, what’s next when a domestic enemy is identified?

Looking forward to hearing from you (not the Secret Service, IRS, DOJ, or Treasury) soon.

{for quality assurance, this post may be recorded by the NSA}