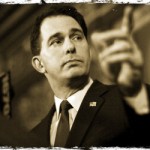 Unless you were listening to Rush or read The Blaze, you are not aware of news that Rush correctly characterized as ‘earth-shattering,’

It’s the fantastic, and real, turn-around that Gov. Scott Walker has done in Wisconsin as reflected in his State of the State address. Not only are new jobs being created, they have a budget surplus already amounting to $912 million, and is giving the people’s money back to them by cutting income taxes and property taxes. Why you might ask? Because Walker believes the taxpayer’s money belongs to them. Not the government. Gov. Walker also made the point that the surplus was not just a gimmick of budgeting or accounting (like we’re used to by the pols in Washington), but was the result of serious, significant policy changes.

Listen to Rush’s take on this as it relates to the Tea Party, conservative principles, and the establishment Republicans. It’s a home run.

Shame on the media for actively ignoring this news story. And shame on the RNC, the Republican Governor’s Association, Sen. Mitch McConnell, and Speaker John Boehner for also ignoring it.

Rush, as usual, is right. The Wisconsin success story must be touted as the example of not just what is possible, but of what has actually been done. In a Blue state no less. Talk about ‘open tent’ and appealing to people from both parties? And under the right leadership can also be done for the country. If the establishment Republicans weren’t so focused on demonizing conservatives, the tea party, and on trying to be Democrat-lite,  their 2014 campaign theme is right before their freaking eyes.  It’s a strong message for how to turn this country around. It’s a ready-made script for a conservative campaign, to contrast Walker’s success story to Mr. Hopey Changy, focused like a laser on his teleprompter, robbing from future generations with debt, jumping from one problem Americans face to another, ignoring the fact that he is the cause of them all, wasting trillions of dollars on “stimulus” spending with nothing good to show for it.