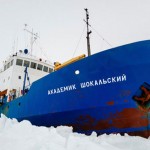 You’ll have to look far and wide to learn that the “scientists” are a bunch of global warming types out to visit the altar of global warming. That they and another ship sent to rescue them also got stuck in the ice is charming.

Oh but the irony doesn’t stop there.

Prior to the voyage, the expedition had pledged to plant 800 kauri trees in Northland, New Zealand in order to offset the carbon emissions from the trip. After the resources expended rescuing them, 800 trees isn’t going to cut it. The new number? Try 5,000, or enough to constitute an entire forest, according to former Act Party leader Rodney Hide.

Ya think any of these scientists know how many trees start and grow all on their own, naturally, around the world? This counting trees stuff is just as big a hoax as is the claim that global warming, no, climate change, is man-made and they (man) can control it.

And it’s not over yet. Now the United States Coast Guard is on its way to attempt to rescue the two icebreakers stuck in Antarctica ice.

What a gem. While Obama vacations in Hawaii, his signature piece of legislation crash and burns. And that’s peanuts compared to what it is doing to the American people.

Hospital staff in Northern Virginia are turning away sick people on a frigid Thursday morning because they can’t determine whether their Obamacare insurance plans are in effect.

Why would a government do this to Americans, and the domestic media not care? They care more about its effect on the president and the law than what it is doing to the American people.

Link:  ‘They had no idea if my insurance was active or not!’: At Virginia hospitals, Obamacare confusion reigns as frustrated patients walk out | Mail Online.