Don’t know about you, but I get calls almost on a daily basis to contribute to a conservative organization, or one claiming to be conservative. Some of which I’ve never heard of. Being skeptical of phone scams, and knowing that democrats have no boundaries to what they will try to do, I’m making it a habit now to verify for myself that the organization calling me is legit, regardless if I choose to make a donation.

For example, I just got a call from a guy supposedly representing a group called Tea Party Leadership. After hearing the common sales pitch about Obama’s misguided administration, the question ends up with ‘can we count on you for a $100 donation today? Or $75?’

To which I followed with a question of my own. Does your organization have a website? Yes, he said. It’s www.teapartyleadership.com. I thanked him, hung up, and tried the address. Doesn’t exist.

Raising my suspicion that it is a scam probably run by a left-wing group lying about who they are to siphon money from conservatives for their own attack machine. I could be wrong. But I doubt it. It’s also possible that scammers are trying the same thing to conservatives and liberals. Who knows?

Being dishonest like that just doesn’t live in a conservative’s mind, and it wouldn’t surprise me to see the Left exploit that. And probably is. Kind of like the way some people prey on unsuspecting senior citizens. And I realize that just having a website isn’t verification of their legitimacy either. This guy just didn’t plan ahead for such a question.

There is a need for a way to combat this kind of fraud and to insure that your conservative dollars are going to the conservative cause you expect. If someone wants to start a list, you can put teapartyleadership.com on the list.

UPDATE: 8/11/2013 (see comment below) There is a real site called The Tea Party Leadership Fund. Maybe that’s what the guy meant? If you want to contribute to the Tea Party, and I hope you do, make sure you use this URL: http://www.theteapartyleadershipfund.com/

A day after an Islamic jihadist beheaded a Brit in an unprovoked attack in broad daylight, the political correctness has taken over reality yet again.  Don’t tie it to Islam, although it is a terrorist attack, we are told. BS. It is inextricably tied to Islam. And Islam needs to fix it. It can begin in the Mosques. They can have sensitivity training to teach potential jihadists that there is no war on Islam. And people of other religions are not an enemy of Islam. And despite what the Koran says, it is against Islam to subjugate or kill non-believers. 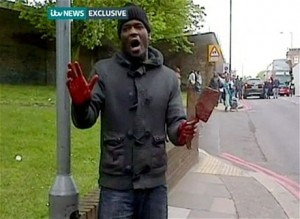 I have yet to see any evidence that a so-called war on Islam exists, as is claimed by this piece of shit with a knife and cleaver in his blood-soaked hands. By all accounts in news that I’ve seen, there is a war on so-called infidels, aka non-believers of Islam, going on. And that’s not an exaggeration. That’s what they profess. And this is what they do.

Seeing this picture brings up all kinds of frustration with PC and anger for the ‘tolerance’ of it. It is reported that this terrorist’s accomplice had a handgun. Brits are not allowed to carry handguns. So, the law-abiding citizens are prey to the criminals and terrorists that have them.

My gut reaction to punish these murderers had me thinking of something particularly gruesome, and appropriate for the cruelty he 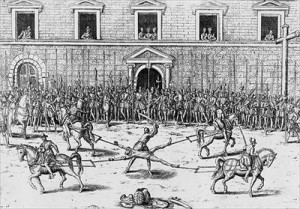 inflicted upon that innocent victim. Tractor pulls came to mind; with the criminal tied between two tractors with a rope on one leg and the other around his neck. Upon discussing this method of execution with a history buff, he suggested drawn and quartering, like used to be done centuries ago. Ropes tied to each of the four limbs of the condemned, and four horses attached to each rope. Upon direction then running ‘off’ in four different directions. Brilliant idea befitting the crime. The condemned wouldn’t die immediately by ripping his head off. Instead, he would have a little time to ponder his demise in pain. And, it’s environmentally friendly. No fossil fuels to burn to get the job done.

Fortunately for the terrorists, current laws don’t allow such forms of execution. With all the attention paid to ‘fairness’ in recent years, don’t you think a little fairness in execution is in order? And instead of doing it in the public square or in the middle of the street, make it a pay-per-view event. Use the proceeds to protect our Embassies abroad and enhance security at home. Being a little pragmatic about the whole idea, and in anticipation that such a suggestion for use of the proceeds might not sit well with some, I would concede to use the proceeds to fund Planned Parenthood instead of the federal funding it is taking from taxpayers. Funding Planned Parenthood with the proceeds would be an added incentive to track them down. I could see that getting bi-partisan support.

OK, I feel better now. Just trying to be helpful.

Feeling any outrage yourself? Get it off your chest. You’ll feel better.