A shooting incident interrupted a Mother’s Day parade in New Orleans’ 7th Ward. Police are discounting terrorism as the cause. They are calling it your basic “street violence.”

The apparent target of today’s shooting was the Original Big 7  club and its followers. Founded in 1996 in the Saint Bernard Housing Projects in the 7th Ward of New Orleans.  Despite hundreds of witnesses, police have no leads or suspects in custody. On their facebook page, the club emphatically states “Crime and violence in New Orleans is a systemic problem and we strongly believe that safeguarding our cultural heritage helps to address the roots of violence.” Emphasis on “systemic problem.”

New Orleans Mayor Mitch Landrieu (D) urged witnesses to come forward with information during a news conference Sunday night at a hospital where gunshot victims were taken. “These kinds of incidents will not go unanswered. Somebody knows something. The way to stop this violence is for you all to help,” he said.

This kind of gun violence isn’t going to be solved by making more laws to not enforce. Shooting people in the streets is already illegal. It’s already illegal for felons to have guns.

Gun violence like this is going to take the people living there to solve on their own. It is not gun control that our nation needs but self-control; a lifetime result molded from the synergies of love and discipline in the home, bonding in the community, and encouragement in the church. Government and laws in the absence of these will serve no useful purpose. 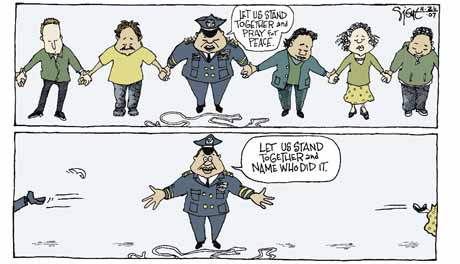 Link: As many as 19 injured in shooting at New Orleans Mother’s Day parade