Let’s not pretend to be so shocked that the House of Representatives wants to fund the government, but not Obamacare. The latest iteration of House Republicans 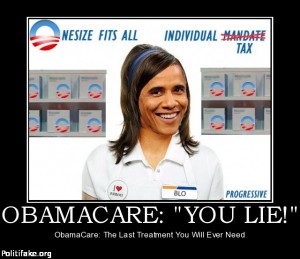 negotiating with themselves has melted down to merely extending the same exemptions that Obama illegally gave businesses (until after the mid-term elections) to you and me. Ordinary citizens without the deep pockets.

Obama and his believers in the media will say, hey, it’s the law. You have to fund it. Well, the ACA may be the law, for now, but it is anything but normal.

As for the Supreme Court ruling on it. That was only about whether the Federal Government can force you to pay for it. Contrary to all of Obama’s and the supporters of the ACA’s arguments up to that point, the Supremes said, with the aid of Chief Justice Roberts, that Congress has the power to tax, so it was a tax. Obama’s lawyers argued all along that it was not a tax, but was a penalty, a fine. Roberts had to change their argument in order to declare it constitutional. Whether the Constitution permits the Federal Government to force citizens to buy a product was not addressed.

Since Obama and Reid have said they’re not willing to talk or negotiate with the House leadership, the House has only one recourse left to them under the Constitution. And that is, the House controls the purse. Not funding the disaster is all that is left. On this, the House must stand their ground. If for no other reason than to force The White House and the Senate to abide by the Constitution as our founders intended.

It’s not the House’s fault that Obama and Reid can’t live with this separation of powers that the founding fathers designed. It’s up to Obama and Reid to not only comply with the Constitution, but to embrace it. Negotiate, and come up with a mutual resolution. Not to demagogue the House with its “my way or the highway” approach. That’s a dictatorship, not a constitutional republic.