In an April 6, 2013 weekly address to the nation, the President talked about his plan to create jobs and reduce the deficit. Didn’t mention the debt, AT ALL. His plan

was increasing taxes and building roads and bridges. He said then . . .

While it’s not my ideal plan to further reduce the deficit, it’s a compromise I’m willing to accept in order to move beyond a cycle of short-term, crisis-driven decision-making, and focus on growing our economy and our middle class for the long run. {emphasis added}

Today, over six months later, and two months after a five week vacation for Congress, and one day after a grandstanding government shutdown he imposed was lifted, Barack “The Crisis” Obama goes before the mic again, ostensibly removing himself of all responsibility and says “The American people are completely fed up with Washington.” (Not just fed up. I’d include Fed up, capital F)  He says . . .

“I understand we will not suddenly agree on everything now that the cloud of crisis has passed. Democrats and Republicans are far apart on a lot of issues,” Obama said. “And sometimes we’ll be just too far apart to forge an agreement. But that should not hold back our efforts in areas where we do agree.”

Shouldn’t hold back “our efforts” where we agree? You mean like opening National Parks, funding the military and veterans, funding funeral benefits for fallen soldiers? Those areas of agreement? Virtually funding everything except Obamacare? It was those areas that prompted him to not agree just to keep the crisis going. 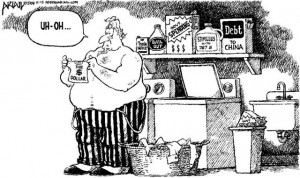 dollar and interest rates when the party is over. Getting our own economy and the global economy back to market realities will cause interest rates to rise to a “normal” rate. It will also have a negative, albeit temporary effect on the stock market and your 401K. When interest rates rise, mortgages and other financed purchases, like your car and credit card purchases, will cost more. As the value of the dollar falls, everything you buy will cost more. This is the bad tasting medicine referred to in the previous post. Contrary to the Obama administration’s belief, shouldering future generations with our debt is not an option.

So what did the House of Representatives hope to accomplish by what was thought to be a futile attempt to defund Obamacare, aka a government shutdown?  How was that strategy supposed to help the Republican party? 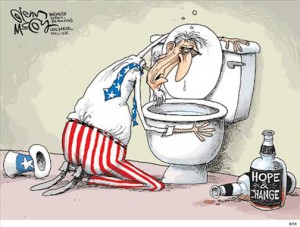 Common questions over the government shutdown, arguably, imposed by President Obama. Given that the House passed bills to keep everything, but Obamacare, running.

The strategy was doing what they were elected to do, exercising their Constitutional responsibility of holding the purse strings of the federal government. It’s no more complicated than that. It wasn’t meant for the good of the party. But rather, the good of the country which, is being buried in debt at a rate unprecedented and with no end in sight.

It had less to do with politics than fighting the good fight which, was better than not fighting at all. Today, it is clear they did not prevail. Turned out to be a “lost the battle, not the war,” kind of thing. 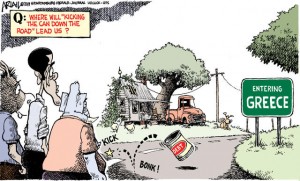 The politics of it all is that Congress is playing Russian Roulette with a fully loaded revolver. There’s NO budget proposal by the majority that reduces deficits towards a balancing point, let alone paying down the debt. By definition, a budget that includes deficit spending, includes borrowing. And borrowing adds to our debt. (I know. Slim chance that the low-information crowd will have read this far. But just in case.)

Check this link at the CBO. There are two scenarios, Bad, and Worse.http://www.cbo.gov/publication/42905 It says that no budget now or in the future will be without deficit spending. The only variable is will we go over the cliff at 100 miles per hour or 50 miles per hour.

First thing to do is to scrap the ‘baseline budgeting’ game, and make budgets like you and I have to. Then start reforms from there. THAT, won’t be popular with anyone. But when you’re sick, the medicine you need to get well tastes bad. The so-called ‘leaders’ in Washington should be preparing us for recognizing the illness, and prescribing the medicine. Instead, they’re kicking the can down the road.

America needs the right kind of doctor to save America. And President Obama isn’t the one. If one does not rise to the call, the 2014 and 2016 elections is where we’ll find one.