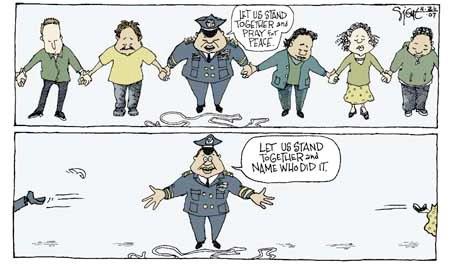 There are signs that people are realizing that fact as noted on the Pensacola News Journal’s editorial page, A caring community. Organizers of “Saturday’s Soul Bowl” hoped to focus on fighting crime from the ground up. From within Pensacola’s neighborhoods.

“I call it cancer,” McAway told sportswriter Matt Foster. McAway, director of the Pensacola Youth Sports Education Association’s Rattler teams, was referring to the violence in Pensacola. “It’s a cancer because it’s eating up people.”

Lumon May, director of the Southern Youth Sports Association Tigers squads, reinforced McAway’s comments saying “Everyone needs to live in a safe neighborhood, and we can’t be silent about the violence.”

By now everyone is familiar with the word “obstructionist.” It’s what Democrats call Republicans every time they don’t get what they want. Since everyone is now comfortable with the word being used in the political arena, it’s time it be employed here. Only difference is, what Republicans in the House want also happens to be

what most Americans want, a functioning government actually being responsible with the people’s money.

Below is a quick summary of what could have been accomplished if only the Democrat-controlled Senate would stop sitting on everything that comes from the House. Well, that and if there was a President that would put the people and the constitution ahead of his personal agenda and actually sign the bills into law.

House Continues its Work to Reopen Government
The House continued its efforts today to reopen the government through targeted funding bills.  H.J.Res 80, the American Indian and Alaska Native, Health, Education, and Safety Act, which would provide funding for the Bureau of Indian Affairs, Bureau of Indian Education, and Indian Health Service, is the 22nd bill passed by the House since September 20 that would fund all or part of our government.