All of a week after several weeks of calling House and Senate Republicans hostage takers and terrorists for wanting to save Americans from the terribly flawed Affordable Care Act, aka Obamacare, six senate Democrats (up for re-election) are strapping on their bomb vests and calling for delay and/or repairing as

well. And oh yeah, they’re racists too. The only reason they don’t want it to go into effect is because Obama is Black.

It is instructive to note the emphasis that the media puts on this move. It’s not about the poor people who won’t have insurance, it’s about how it will affect the Democrats politically.

As Democrats began to fret about the political consequences ahead of the 2014 midterm elections, the administration late Wednesday said it was granting what amounts to a six-week filing extension. The March 31 deadline for having insurance became the new deadline for applying for it.

You will recall that the bills that the House proposed a few weeks ago to end the government shutdown were defeated for a lack of six Democrat senators who stood with their party instead of the American people. Today, they’re claiming to be defending the American people.

Hearken back to how the unaffordable Affordable Care Act was promoted with the mandate attached. It was called a “fine” or “penalty” all the way up to the point it went to the Supreme Court. Then, the description of the mandate changed from a penalty to a “tax” you will pay if you did not buy an insurance policy that the 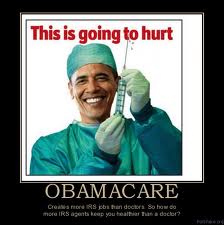 That the government does not approve the policies of hundreds of thousands of insured people is the reason insurance companies are notifying their customers that their policy does not meet the “minimum requirements” as proscribed by Obamacare and is being cancelled as of the end of the year. (Barack Obama, “If you like your policy, you can keep your policy.”) Oh never mind.

Which brings me to the mandate, the penalty. The alternative revenue stream that is supposed to make the government exchange insurance policies “affordable.”

Aside from people finding out how expensive their government exchange insurance policy with high deductibles will be, presuming the healthcare.gov website gets fixed, the details of how the penalty is collected is where the program breaks down. Long story short, if you pay taxes already and don’t get a tax refund, and choose not to buy health insurance, you’re home free. If however, you are like many low income people who revel in receiving a tax refund (which is actually you paying more taxes than you owe), and choose not to buy the expensive health insurance, the government will deduct your penalty from your refund. You’ll pay your fair share. (Obama’s words) So where does this end up? Right where Obama intended it to end up. He will try to take Obamacare to its final destination, a single payer system where the private sector health insurance industry becomes extinct and the whole country is on Medicare.

The Joint Tax Committee prepared a summary of Obamacare that includes this discussion of the mandate:

The penalty applies to any period the individual does not maintain minimum essential coverage and is determined monthly. The penalty is assessed through the Code and accounted for as an additional amount of Federal tax owed. However, it is not subject to the enforcement provisions of subtitle F of the Code. The use of liens and seizures otherwise authorized for collection of taxes does not apply to the collection of this penalty. Non-compliance with the personal responsibility requirement to have health coverage is not subject to criminal or civil penalties under the Code and interest does not accrue for failure to pay such assessments in a timely manner.

As I understand it, the only way the IRS can possibly collect the penalty is by withholding your tax refund. No problem: if you arrange your taxes so that you don’t overpay, the penalty can never be collected from you. Some observers who should know better continue to tell young people they should pay the penalty and forgo expensive insurance. No: young people, if they want to follow their self-interest, should forgo expensive insurance and NOT pay the penalty, because it can never be collected from them.

Since Obamacare is, by all accounts, “settled law,” it will be interesting to see the wailing from Democrats to change it when the people who look to them for sustenance find out that the government is dipping into their tax refund while taking nothing from those rich people.

The beauty of this train wreck is that Republicans have nothing, zip, zero, nada, to do with it. They didn’t write it, they didn’t amend it, and they didn’t vote for it. But they do have an alternative that does not increase the debt, will actually work to decrease premiums, doesn’t involve raising taxes or imposing fines on poor people, has no death panels, and, doesn’t put the government between you and your doctor. It’s called H.R. 2300, the Empowering Patients First Act of 2013.

Link: DELAY THE MANDATE? WHAT MANDATE?