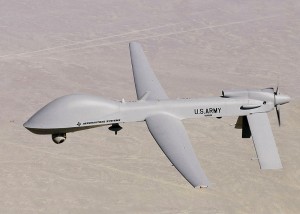 “Does the FBI use drones for surveillance on U.S. soil?” Republican Senator Charles Grassley of Iowa asked during a Senate Judiciary Committee hearing.

“Yes,” Mueller said, adding that the use was in “a very, very minimal way and very seldom.”

I’m sorry to hear that they are being used in “a very, very minimal way and very seldom.” Up to me, they would be employed full-time along our southern border, helping to protect our sovereignty. If only we had an administration willing to respond to border crashers, including OTMs (other than Mexican) like alQaeda.

There’s a way. But no will.