From The White House Monday, President Obama made another stab at spreading the wealth around. Using the 50th anniversary of the Equal Pay Act, the wealth envy warrior is pushing what he calls the Paycheck Fairness Act. President Obama said . . .

Now is the time for Congress to step up and pass the Paycheck Fairness Act. … Now is the time to make sure that we are putting in place a minimum wage that you can live on.

There’s a couple of problems with that. First of which is, one has to have a job. You could have a $20/hr minimum 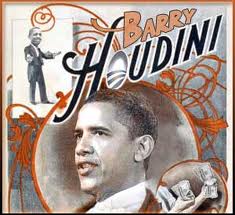 wage, but what good is it doing you if you don’t have a job?

Creating jobs used to be his priority. At least that’s what he’s been telling us for about 5 years now. His rhetoric alone seems to insulate him from any responsibility of his actions which, have given us nothing but trillions of so-called stimulus spending, over $16 Trillion in new and record debt, high unemployment and the lowest labor participation rate since Jimmy Carter. What jobs are being created are low paying, and not enough in number to break even with retirements and population growth.

Second, and more importantly, it is not the role of the federal government to mandate that employers pay “a living wage” to anybody. Playing on your emotions with the notion of something fair does not give him the Constitutional authority to compensate for his inability to set the framework for a vibrant and growing economy.

Now to the real reason the President is harping on raising the minimum wage. It is just another attempt at quid pro quo to BIG LABOR. Like any sleight of hand magician, when he is shows you one hand with the fairness appeal, look for what the other hand is doing.

Raising the minimum wage does nothing to create jobs. The result is that raising the minimum wage not only puts the poorest, and lowest skilled workers in the unemployment line, it ends up artificially pushing up ALL labor costs, causing inflation in every area of the economy. But it does mean pay increases for BIG LABOR. You see, the big contracts are tied to the minimum wage. When it goes up, their wages also go up. And in the case of the public sector unions, the taxpayers’ overhead also goes up. So the union “working people” with $22/hr jobs will get a raise. Isn’t that special?

Seventy-eight percent of Swiss voters embraced changes made to the asylum law last September as applications soared to their highest level in over a decade. Switzerland, with a population about the size of the state of Virginia, is experiencing  a surge. Attributed in part to the Arab Spring uprisings, the surge is the highest number since the height of the Balkans war in 1999, when nearly 48,000 people sought refuge in the country. Among other things, the law limits the right to family reunification to spouses and children. They also discontinued using Swiss embassies for asylum seekers to apply. Meaning they would have to get to Switzerland to apply.