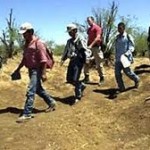 The (Corker-Hoeven) border surge amendment  to S.744 is the free for all signal for a real border surge. And it is the biggest welcome mat that the politicos in Washington ever laid out. To potential illegal aliens, it says “Come on over amigos (and OTMs), we’ve got your back.”

Cutting through the smoke and mirrors of the horribly flawed bill, separate from a waiting period for green card status, the bill immediately grants legal status to every one of them. No waiting. It also puts DHS in charge of deciding when the border is secure, not Congress or anyone else. Among those autonomous powers is the power to decide not to complete building the border fence that was made law six years ago.

Big Sis, DHS Secretary Janet Napolitano, has already said that our southern border is more secure now than it has ever been. That’s not saying it is secure by any stretch. On a scale of 1 to 10, with 10 being the most secure, border security going from 2 to 3 isn’t saying much.

That the RINOs and gullible senators that voted for this amendment think it will be good for America is reason enough to either recall them or not re-elect them.