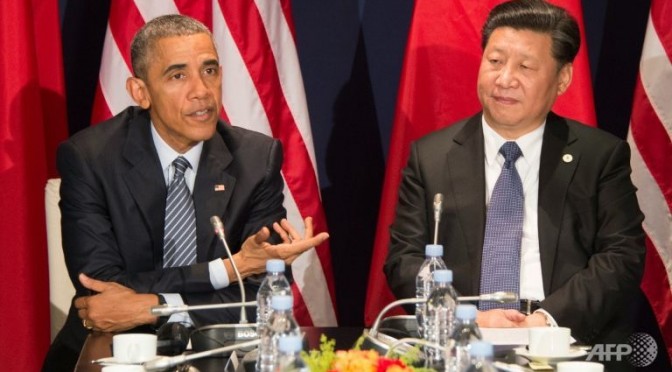 China approves far-reaching counter terrorism law. Virtual control and access to all internet and electronic communications, to be able to get terrorists who use encryption.

The term, according to Xinhua, is “defined as any proposition or activity — that, by means of violence, sabotage or threat, generates social panic, undermines public security, infringes on personal and property rights, and menaces government organs and international organizations — with the aim to realize certain political and ideological purposes.”

“However, some analysts feel that the purpose of the bill is aimed at control of the Chinese population, rather than curbing domestic and international terrorism.”

I tell you. This is the kind of stuff that makes Obama envious. He and Hugo Chavez (Venezuela) were soul brothers. That is, in a political sense. Watch for China’s president, Xi Jinping, to be visiting The White House. Oh wait, Xi Jinping was there in September, 2015.

It’s pretty obvious that China wants a part of everything their people do. And sets the standard for what “terrorism” is, to include un-friendly sectors of the country. Like the (ethnic minorities) Muslim sectors.

In the U.S., it would be an Obama wet dream, to have government-mandated access to watch what you do. Especially those bitter clingers you know. IRS, DOJ, EPA . . . imagine the thrill of government intimidation by a visit from some of those letters of the Executive branch. Xi Jinping and Obama have a lot in common in their idea of government and its role. China doesn’t have a Constitution and Obama will not follow the Constitution. Going by China’s definition, it’s not a stretch.

Actually, Obama already uses those letters to intimidate political opponents. Using China’s definition of what terrorism is would make it more fun (from his perspective) and easier to do.