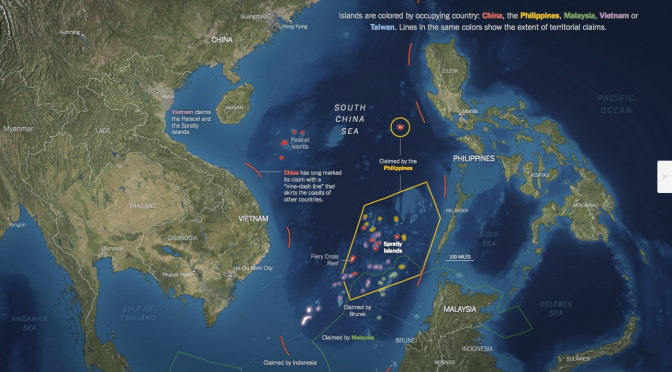 A U.N. (Useless Nations) tribunal has ruled in favor of the Philippines in a case against Chinese claims to rights in the South China Sea. The Permanent Court of Arbitration said there was no evidence that China had historically exercised exclusive control over the waters or resources. And, true to form, China called the ruling “ill-founded” and says it will not be bound by it. See that middle finger?

As foreign relations and global security goes, where is President Obama on the stealing of the South China Sea by China? It’s a rhetorical question. He’s at the same place he was when Russia stole Crimea from Ukraine.

Looking back, the U.N. Permanent Court of Arbitration ruling from The Hague against China may become the most discernible symbol of the failure of President Barack Obama’s foreign policy. The U.N. ruled. China ignored. It is a pattern that leads to a weaker America, which is a feature, not a bug, of Obama’s foreign policy.

Because this move by China will have a major impact on the entire region, trade routes, air space, and common defense, this should be big news.  China is claiming all the surface and air space as their own, including lands owned by other countries in and around the South China Sea. And hardly a peep out of the media about it.