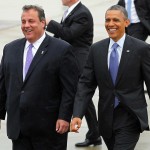 Doing what they do best, the DNC begins their campaign to take down all possible republican challengers for the 2016 presidential campaign. Casting the “Christie administration” as the demon.

“Gridlock,” the ad begins, according to a transcript.

“That’s what happened one year ago in Fort Lee, when the Christie administration shut down lanes to the George Washington Bridge. But it’s also what Chris Christie has brought to New Jersey — wrecking our economy and losing our trust.”

Of course, you can see the similar attacks brought against the “Obama administration” so what’s the big deal?

The campaign tactic of marginalizing your opponent to the point of eliminated them is what the leader of the Democrat party, President Obama, does. It is all he knows. That’s what is unfolding in this ad targeted at Christie today. Don’t be distracted by it. You can bet that Christy won’t.