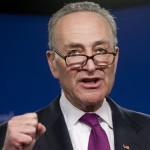 Charles Schumer (D-NY), No. 3 leader in the Senate’s Democratic majority, is working on a tax provision designed to discourage companies from moving their tax domiciles overseas, where the tax liability is lower than the U.S., that has the highest corporate tax rate in the world.

Which is exactly what is wrong with the current IRS tax code. It is used by politicians as a tax hammer to either reward or punish economic activity. In this case, Schumer is upgrading to a sledge-hammer, by attempting to grab business profits retroactive to 1994. It’s the Democrat’s version of an Occupy Wall Streeter’s wet dream. And would most certainly fire up the wealth-envy part of their party’s base.

The proposal would cut the amount of deductible interest for inverted companies to 25 percent of U.S. taxable income from 50 percent, according to a draft obtained by Bloomberg News.

There is only one tax code that is economically stimulative. Not just for business, but for the middle class and the poor. It’s called the FairTax. And it does not have tax hammers. If fact, the FairTax can not be manipulated by politicians to pick winners or losers. On the contrary, it couldn’t be more open and transparent, or fair. And instead of being an incentive to move out of the country, the FairTax would be the incentive for corporations to being their assets back home and be put to work here. And the only employment problem we would then have is finding enough people to fill the jobs that would be created by the economic recovery that would result in all sectors of the economy.

Link: Schumer Anti-Inversion Tax Plan Could Reach Back to 1994 – Bloomberg.