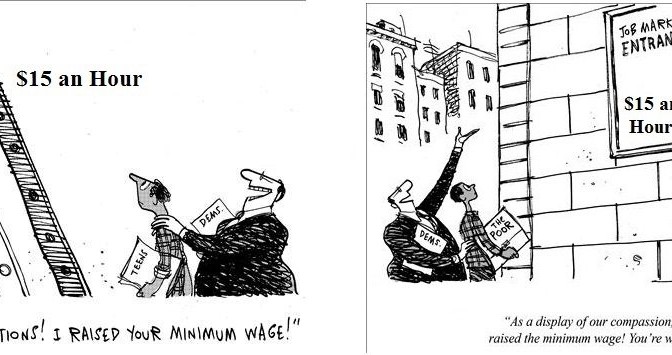 Here we go again. A labor union advocate riding on the coattails of fifty and a hundred years ago. There’s a reason union membership is declining. They’re no longer needed in most cases. Especially so in the public sector.

Due to Big Labor’s successes in the last century, employers learned from them. They learned how to treat their employees so that there’s no longer a “need” for a union to step in and demand you pay them dues for protecting you from something that you don’t need protecting from or negotiating for. They want you to believe you have no power. You have all the power. It’s called “two feet.” And you can use them to leave an employer that you aren’t comfortable with, for whatever reason you choose. And, you have a voice. Use it yourself. Don’t feel you need a union representative to act or speak on your behalf. If you do, you’ve already surrendered your freedom.

Now it’s Big Labor’s turn to learn something. Be competitive or go out of business. I use the term “business” in an odd way because labor unions produce nothing. They are a leech on business. They are the reason that some businesses have gone out of business, or moved to another state.

Big Labor should put their theory to the test. Let them start a business that produces something (other than marijuana) and sell it on the free market (not to the federal government), and pay their employees two or three times the market value of a comparable private sector job, and see how long they stay in business. Without a government bailout of course. Go for it.

Here’s a fact for those Big Labor acolytes like Aaron Wazlavek who squawk class warfare about those evil 1 percenters. Under Obama’s economy, the top 10 percent, not 1 percent, are doing just fine. It’s the other 90 percent, the so-called working people (as if the top 10 percent don’t work), that have seen their incomes shrink. That median family income has fallen every year since Obama’s “economic recovery” began has nothing to do with labor union membership being low.

A solid majority of U.S. workers consistently tell pollsters that they would like to join a union if their employer would simply not interfere.

Problem with this propaganda is this. When U.S. workers have a private vote on whether they want to join a union, they vote NO.  That’s not a poll, which can be manipulated to get a desired result. That’s a private vote, and the right to a private vote is not negotiable. “Card Check,” a union scheme to strip U.S. workers of their private vote, is government-sanctioned interference. Boosting labor union membership is not the responsibility of our government. Labor unions can succeed or fail on their own.

Another “hot button” of Big Labor is the minimum wage.

Big Labor advocates will say that raising the minimum wage to $15/hr or to what they call a “living wage,” which a starting salary was never intended to be, will cause the economy to grow because people will make more and therefore, be able to spend more. And (here’s the kicker) they’ll also say that it will reduce the deficit by decreasing welfare because, ostensibly, people will be making more money.

Here’s what really happens. Raising the minimum wage automatically gives labor union members, whose contracts are tied to the minimum wage, a raise. You know, the ones already making over $20/hr. The main reason President Obama wants it. His quid pro quo for Big Labor helping him get elected, twice. By arbitrarily raising the cost of labor employers must pay, employers will be forced to do with less of it (if not just go out of business) AND be forced to increase the price of their products, goods, and services to cover it. The result of that is, fewer people working, higher cost of living for everyone, including the long-term unemployed and the ones that just lost their job due to reductions in force, AND an increase in people dependent on government welfare. The second reason Obama wants to increase the minimum wage.

Bottom line, labor union membership is totally dependent on Big Labor learning something from their shrinking influence. Not the federal government and Card Check. And, hiking the minimum wage would have the reverse effect of what the proponents are saying.