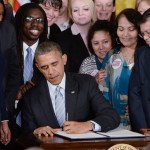 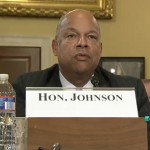 It is no longer even arguable that this administration is hell-bent on not securing our border while telling us that it’s never been more secure. One day after posting this On Immigration, Show Me The Metrics, there were four terrorists caught on the Texas border, two each from two different locations. That was on Septermber 10th. One day before the 13th anniversary of the 9/11 terrorist attack.

It was that attack that begat the Department of Homeland Security cabinet position. The purpose of that multi-billion dollar bureaucracy was to streamline communication on threats or potential threats, and to protect the country. So one would think that the capture of four terrorists would elevate to the level and interest of DHS Secretary Jeh Johnson to jump on the details and tell his boss, the president. No way.

His response at a House Homeland Security meeting yesterday was . . .

Chaffetz: “Since you took office, Secretary Johnson, on December 23, are you aware of any apprehensions of suspected or known terrorists who were trying to come to our country illegally?”

Johnson: “Umm. That’s an important question. Uh, attempting to come to this country?”

Chaffetz: “Who came across our border illegally. Did you ever apprehend anybody who was a known terrorist, a suspected terrorist, somebody who had ties to a terrorist organization?”

Chaffetz: “I have reason to believe that on September 10th there were actually four individuals trying to cross through the Texas border, who were apprehended at two different stations that do have ties to known terrorist organizations in the Middle East. Are you aware of that?

As if that incompetence isn’t enough, an internal (as in we’re not supposed to know the truth) DHS report shows these disturbing metrics.

During the 351 days of fiscal year 2014, there were 466,000 apprehensions of illegals, also 157,012 illegals that “got away,” and 142,630 individuals that were reported “turn backs”. The compilation of apprehensions represented people from 143 different countries. Additionally, the sensors that are placed in locations primarily in the southwest, recorded a jump of over 1,000,000 hits from fiscal year 2013 until now.

According to a Government Accountability Office (GAO) report mentioned by Congressman Chaffetz, there is only a 6% operational control of our border. Which means, the numbers quoted above are likely only a very small representation of the real traffic of illegals from all across the world, including the Middle East, which are easily gaining access to our country.

Johnson: “Um, I don’t have that number off-hand. I do agree with you that the challenge of those coming from countries other than Mexico, particularly into the Rio Grand Valley sector is one I’m very concerned about. It’s something I’ve been concerned about since taking office in January. I’ve seen it myself at our detention center in Brownsville when I visited there in January. There were something like 80 nationalities of illegal migrants present there.

Not only is the administration not taking their job seriously, in the last 13 years, they’ve made no attempt to secure the border.