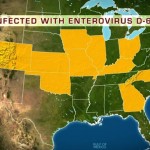 Waiting with baited breath to hear from the CDC, the answer to these two questions. Is this strain of the subject virus found in any of the Central American countries? If you don’t know, then is there an effort being made to do the testing down there to find out if that strain exists down there?

Since we’re dealing with the Obama administration, I’m really not expecting a truthful response, if I even get a response. Regardless, there ought to be some biologists, or whatever they are called, that can go to Guatamala, Equador, Mexico, and the rest of the countries that are illegally flooding our borders, and do the science to see if this strain exists there.

The Connecticut Department of Public Health reported that there have been 97 confirmed cases of EV- D68 across the U.S. since mid-August, FOX CT reported.

“We’re starting to see a few just in the last day or so, where I’m really suspicious that’s what’s happening,” Dr. Nicholas Bennett of the Connecticut Children’s Medical Center, told FOX CT. “I guess the concern about the virus is how quickly and how severely the kids have been affected with their breathing.”

The NYS Department of Health also revealed in the statement that the Centers for Disease Control and Prevention, or CDC has been closely working with health departments in several states “to investigate suspected clusters of respiratory illness.”

One thing is certain. There seems to be zero reporting about any connection of this “new” disease with the new illegals that Barack (the Coyote) Obama is shipping all over this country.

What it says to me is that an inquiry to the Pan American Health Organization is in order. The international program set up to find and report infectious diseases is voluntary. And according to the CDC, no country in Central America has the technology to test for EV- D68. Only labs in the United States do. Which would explain why there are no reported cases in Central America. It does not mean that there are none.

What I do not know at this time is whether any Central American countries have requested the services of the PAHO “to perform enterovirus typing.”

The pull quote from their email is this . . .

[I]t is most likely that the virus could be circulating there but in low numbers, undetected.

Below is the reply from the CDC.

Thank you for your inquiry. From the scientific publications published to date, we are not aware of any EV-D68 detection in countries from Central America. However, it is most likely that the virus could be circulating there but in low numbers, undetected. The Pan American Health Organization has enlisted the help of our laboratory here at CDC to perform enterovirus typing for any country in South or Central America that requests it. In addition, CDC currently has developed the Global Disease Detection Program to help other countries identify and detect new illnesses.

You can find more information about CDC’s Global Detection Program and our site in Guatemala here:

We hope that the information provided has been useful. Please do not hesitate to contact us should you need further information.

Centers for Disease Control and Prevention

Great find Cosmic Girl. If news reporting (or lack thereof) of EV-D68 is any indication, apparently not. But with the open borders agenda of this administration, and the passing of illegals (children included) from one coyote to another, this administration knows this, and is mute about it. Especially before the mid-terms. Because sacrificing America’s health is second string to Democrats retaining political power and control. No price is too great for that.