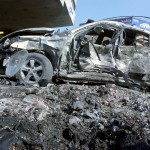 Can I get an Allahu Akbar الله أكبر?

BAGHDAD — An instructor teaching his militant recruits how to make car bombs accidentally set off explosives in his demonstration Monday, killing 21 of them in a huge blast.

Link: Iraqi terrorists accidentally kill 21 of their own 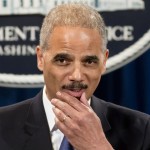 How much longer for Attorney General Holder? The race is on to quash and delay the Fast & Furious investigation until he is sure the evidence and testimony against him and his department is quashed and gone. Then he’ll leave.

U.S. Attorney General Eric Holder plans to stay in the Obama administration well into 2014 but declined in an interview with The New Yorker magazine to say precisely how long,

Or, he won’t escape the evidence, despite years of delay and hiding, and will be frog marched out of there, right into jail where he belongs.

Link: U.S. attorney general Holder says he will stay on well into 2014