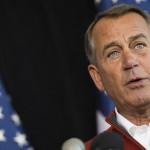 The problem with Speaker Boehner and the rest of the establishment Republicans who are meeting in Maryland to come up with an agenda for 2014 and beyond, is that they are letting Obama and Democrats set the narrative. Democrats want this, they want that, whether it’s Obamacare, deficit spending, minimum wage, Immigration Reform. The latter translates to amnesty and the end of America as the we know it.

If all you’re going to do is accept the premise of the Democrats and propose your own version that accomplishes the same thing, you’re abandoning your principles and the republicans who hold those principles dear. About half the country. Which explains why polls are showing people who used to call themselves republicans are now calling themselves independents.

The Republican leadership seems to be stuck on stupid, and instead of saying NO to these Democrat initiatives, like an opposition party should, they’re accepting their premise, ignoring the American people, and coming up with their own version of the same policies that will destroy this country.

Where immigration is concerned, the only reform that needs doing is to secure the borders and enforce the law. And do nothing more, NOTHING, until that first step is finished. Not planned. Not agreed to, but FINISHED. Then, and only then, should we move to step two. Whatever step two might be.

What Boehner doesn’t get is, just because comprehensive immigration reform and raising minimum wage, and income inequality are Obama’s priorities, doesn’t mean that they are high priorities on the minds of the American people. They are not. The top concern is the economy and jobs. An area where Obama is proving to be a complete failure. That’s the direction Boehner and the establishment republicans ought to be going. They need to set the premise that most Americans agree with, and make their own agenda. Be the solution to the problems we face instead of accomplices in making things worse.

The last thing 92 million Americans out of a job want is millions more illegal aliens flooding the Unites States of America. And the last thing republicans and independents outside the beltway want is for the establishment Republicans to side with Democrats against what is referred to as the Tea Party. Which really isn’t a party, but an ideology.

Link: Boehner: House GOP is ‘alternative’ to Obama, not ‘the opposition’  |  GOP CRAFTS PLAN TO WRECK THE COUNTRY, LOSE VOTERS