Remember the meme last week coming from The White House? Income inequality, needing to grow the middle class. Oh, and raising the minimum 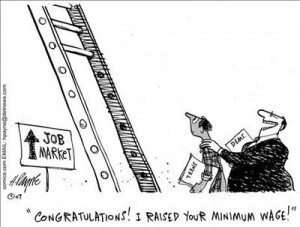 wage. Today? Not so much. Today, everything most conservatives knew would happen under Obamacare, was confirmed by the CBO. The director of the Congressional Budget Office said today that Obamacare will cause the loss of 2.5 million jobs, and, will cause people to migrate from full-time positions to part-time positions. Obama and his media aren’t too concerned about that. In fact, they are saying this is good news. This is a new “freedom.” Americans now have “new choices, new options.” Americans now have the freedom to choose either not to work, or to work less. And, the less they work and the less they make,  the more government subsidies they will get. And conversely, the more they make, the less government subsidies they will get. And higher taxes for richer households also reduce the incentive to work. So now, faced with the possibility of moving up that economic ladder, and because of the consequences of making more money, people will now weigh whether it is worth it for them to take that new job or promotion that pays a few thousand dollars more if it means losing more than that in subsidies. Paul Ryan nailed it by calling it a “poverty trap.”

Does that sound like a plan to build the middle class? Does it sound like a plan to encourage moving up the economic ladder? Of course it doesn’t. And worse, Obamacare is doing exactly as it was designed to do. Aside from ruining the private sector health insurance and health care industries, it is  building and enlarging the dependent class. Effectively killing the American Dream. Or, replacing it with the progressive version of the American Dream. Which is, for the government to control as much of our lives as it can get away with, and, to grow the number of people dependent on the government, insuring votes from whoever promises them the most.

Sorry to say this, but Barack Obama and his party are overseeing the destruction of this country. Which is why the ACA must be repealed, if not replaced.

One thought on “Obamacare, So Much For Building The Middle Class”