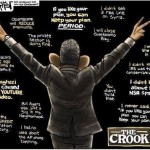 Americans saw an administration that campaigned on being the most transparent in history and has proved to be anything but. Not only that, but they have used the power and instruments of the government to target, and punish whoever it deems to be a political opponent. All while limiting our personal and economic freedom by taking over sixteen percent of the private sector economy.

But it doesn’t stop there. The Obama administration believes it can do anything by saying anything. If they give a good enough speech, then that should be it. When he assigns someone to handle something, like Vice President Joe Biden, or a special committee to investigate something, then it’s done. Problem solved. Then when they actually have to do something, they come up totally and terminally incompetent. They go about manufacturing the news, suppressing the truth, ridiculing those who speak the truth, marginalizing and demonizing those who challenge their facts.

We saw a willingness to lie to the American people, and create their own “facts” for purely political purposes as in Benghazi. And the President said “We Will Not Waver In Our Commitment To See That Justice Is Done For This Terrible Act. And Make No Mistake, Justice Will Be Done.”

The broad NSA data collection that President Obama says is not abused. That our government does not intercept personal emails or phone calls. Really? Ask General Petraeus or Chief Justice Roberts about that. They systematically go about robbing the American people of privacy and therefor liberty.

Then there’s this new NSA revelation . . .

A German magazine lifted the lid on the operations of the National Security Agency’s hacking unit Sunday, reporting that American spies intercept computer deliveries, exploit hardware vulnerabilities, and even hijack Microsoft Corp.’s internal reporting system to spy on their targets. Der Spiegel’s revelations relate to a division of the NSA known as Tailored Access Operations, or TAO, which is painted as an elite team of hackers specializing in stealing data from the toughest of targets. And a lot more.

Now of course you would expect the Obama administration to say that is only for foreign intelligence gathering. That it would never be used to spy on Americans. Wouldn’t you?

The Department of Justice wiretaps news media reporters. In the case of James Rosen, they wiretapped his parents too! And the President says that was wrong.

The IRS targeting conservative groups for audits and, for delaying tax exempt applications for years and claiming that it was just the actions of a few “rogue” employees in the agency’s Cincinnati office. And the President says that was wrong.

New news that the personal e-mail account of a State Department whis­tle­­blower was hacked, and four years worth of messages — some detailing alleged wrongdoing at the agency — were deleted. But the President said that we would never hack into the email account of an American citizen.

And it’s all politics. And what it means is that for 2013, the Constitution of this country and the liberty with it, evaporated.