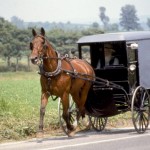 In light of the Knockout Game incidents, you wonder how the hell could it get any worse. Then comes this. A horse pulling an Amish buggy was killed Sunday 11/24/2013, in a drive-by shooting in East Lampeter Township, Lancaster County, Pennsylvania.

The family (a married couple and their children, aged 12, 9, and 7) inside the buggy told police that they heard “a loud noise, described as sounding like a firecracker” as the car passed by.

Upon returning to their farm–which is about a mile from the shooting scene–the family discovered the horse was bleeding from its mouth. After removing a harness, family members spotted a bullet hole in the chest of the animal, who died before a veterinarian could arrive at the farm.

Police Lieutenant Robin Weaver told TSG that a veterinarian will attempt to extract the bullet from the horse so that investigators can develop ballistics evidence. Weaver added that, if identified, the unknown assailant could face weapons, reckless endangerment, or even hate crime charges.