That “the deal” is a first step to blocking Iran’s path to the bomb, is like the Affordable Care Act is the first step to affordable and better health care to Americans. Who believes Obama any more?

Then there is the throwing of American Pastor Saeed Abedini under the bus. A U.S. citizen imprisoned by Iran because of his faith, by reaching a deal with Iran that  eases sanctions and provides “humanitarian relief” while Abedini stays in an Iranian prison.

And to say that this is the first step is to ignore the years, decades, of sanctions against Iran that have failed miserably to do what they were supposed to do. Now we’re saying OK, never mind. Let’s come up with another shell game to not make us look like complete idiots and you can go on with your nuclear ambitions. 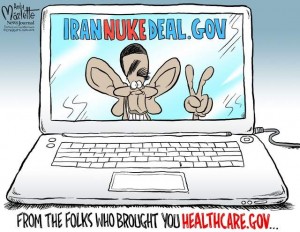 This doesn’t end anything in Iran. Making concessions to Iran’s ending their nuclear enrichment and nuclear bomb ambitions is like playing Russian Roulette with a fully-loaded revolver.

Only difference is the gun isn’t pointed at Obama’s head. It’s pointed at Israel, our troops within range in the region, and our other so-called allies in the Middle East by conventional means. Then through Iran’s terrorist ties to Main Street USA by non-conventional means.

Iran isn’t as big a threat to the United States and the world as President Obama is with his dangerous and naive foreign policy.