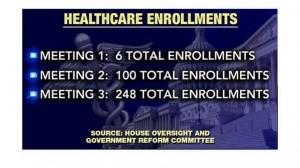 4 million visits and 6 enrollments on first day. 248 enrollments by day two. To meet goals (and projected cost savings), the enrollment must be 39,000 per day. So far, the vast majority of enrollees in the state exchanges are going to Medicaid. Which means, they are not contributing to cost reduction, but rather government dependence. Which means, higher costs for everyone else, and increased debt.

I remember President Obama saying (I know, he says a lot of things) that he wouldn’t sign the bill if it added one dime to the national debt. If he doesn’t himself call for the repeal of his signature train wreck of a piece of legislation, then you can add this to his list of lies.

The American people are not deserving of what Obamacare is inflicting on them. It’s not their fault that they believed President Obama when he was running for President and trying to gain public support for the Affordable Care Act, aka Obamacare, and even after it was passed into law. This isn’t anywhere near a “read my lips, no new taxes” moment. This was the Grand Deception. 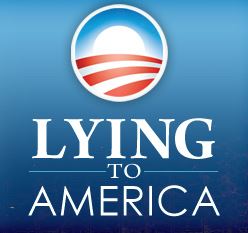 It was nothing short of a Grand Deception because the administration knew that millions of Americans would be necessarily kicked off their plans because of the ACA as early as July 20, 2010. Yet, he decided to play “community organizer” on the honesty and integrity of the American people, and snooker them into accepting Obamacare on his words and promise.

Americans let the ACA pass was because they believed President Obama when he said, “If you like your plan, you can keep your plan. Period.” And “If you like your doctor, you can keep your doctor. Period.” Which should tell you that for the most part, Americans were happy with the plans they had. And they didn’t have a watchdog media to warn and tell them what was in the law. There was no groundswell of opinion for up-ending the health insurance and health care industries.

Americans believed him because . . . he was the President. He’s still the President, only now they also know what he, democrat operatives in the party, and the media are capable of.

Sad truth is, with him and his acolytes, the end (even lying) justifies the means.

And this “We’re going to work with the employers to lower premiums by $2,500 per family per year.”