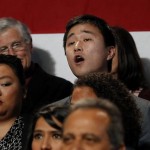 No appearance President Obama makes is random or unscripted. Including this heckler , Ju Hong, who interrupted his speech on immigration in San Francisco on Monday. Hong shouted out because his family has been torn apart by U.S. immigration policy — and the administration has done nothing to help them. Don’t think for a second that the Secret Service did not know this guy’s “history of civil disobedience.”

The event fulfilled two goals. It set himself up as the bystander, void of responsibility, fighting for this, that, or the other. On this day it was amnesty, AKA comprehensive immigration reform. And a distraction from the Titanic-like Affordable Health Care act.

PRESBO sees his support, popularity, and TRUST going South in the polls because of Obamacare, because Americans are finally seeing him for the fraud that he is. What we’re seeing here is his publicist’s (Valerie Jarrett) attempt at stopping the bleeding in the best possible light.

The simple solution to the planted heckler keeping his family together is this. Keep your undocumented family together and take them with you back to South Korea. You could do well for yourself and them there with your U.S. taxpayer-paid college degree.