Having grown up on the Jersey shore, Wildwood, I’ve seen boardwalk fires before. So far, the source and cause of the Seaside Park fire has not been identified. 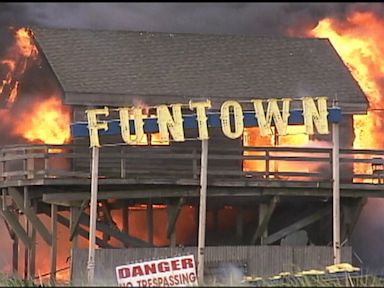 Which means, they haven’t ruled out ‘Jewish lightning.’  Also known as arson. Not to be anti-Semitic or anything, that’s just what it’s called there.

Insurance companies know of this ‘weather’ phenomenon, usually prevalent after Labor Day and, after a bad season. The fact that the fire was on the part of the boardwalk that was not rebuilt after hurricane Sandy could be a contributing factor.

The fire may have begun Thursday afternoon at a Kohr’s frozen custard stand on the boardwalk, according to WABC. However, officials were hesitant to speculate a cause for the blaze, or even speak on the record about where it may have started.

The annual State Firemen’s Convention was going on in Wildwood, NJ when the fire broke out, and continues through this weekend.

Joining in private-sector solution to improving not only access to health care, but the health care and the health insurance industries, are Scott Rigell [R-VA2], Scott Tipton [R-CO3], and Randy Weber [R-TX14].

H.R. 2300, the Empowering Patients First Act of 2013, is all of 249 pages long, compared to over 20,000 pages of law and regulations, and still growing, in Obamacare. Why? Because is not designed as a government take over of the health care industry, or to kill the health insurance industry, and put the government between you and your doctor. Further, it does not require “Navigators” hired by the government and paid for by you, to teach people how to enroll. There is no fine, penalty, or tax imposed on anyone for any reason. Therefore, it won’t be a job killer or impediment to job creation. And it won’t make keeping your current health plan more expensive like you (and labor unions) are experiencing right now.

Which is why Obamacare needs to be repealed or, at the very least, defunded. At a time when the president’s credibility is at an all time low both on the world and national stages, he could fix this one and take credit for it.

He could admit that, despite all that he thought or was told the ACA would do, it is not working as advertised. He could remind us of his pledge to the American people when he said he wouldn’t sign the bill if it didn’t lower cost and improve access to health care, you can keep your plan and your doctor if you want. President Obama could begin to redeem his credibility, by keeping his first promise, and call for the repeal of the Affordable Care Act.