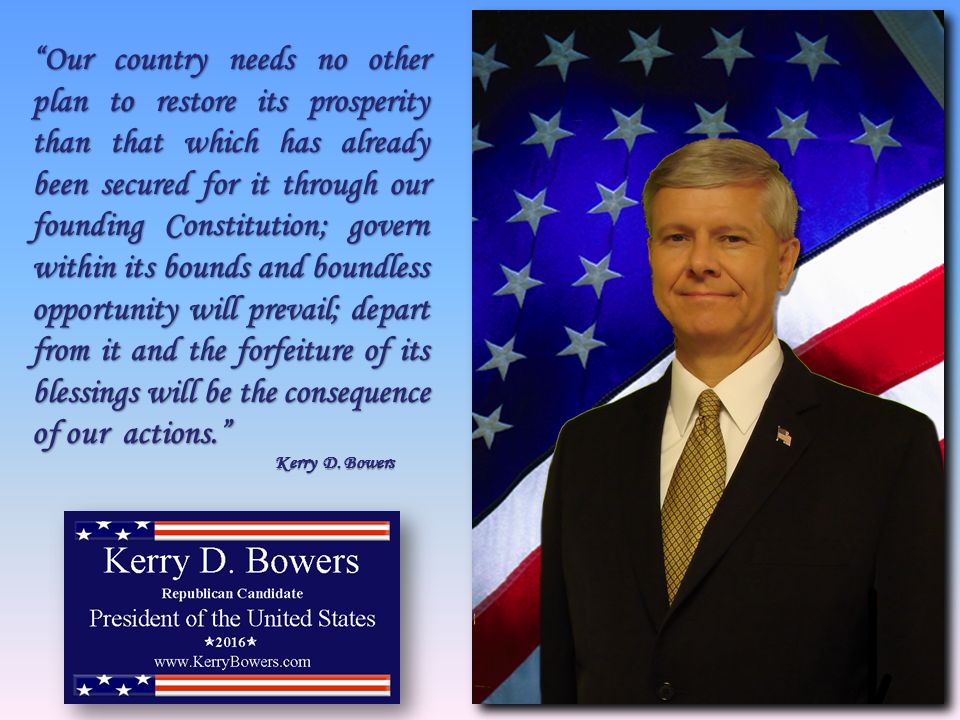 I am pleased to announce and pass along this video of Kerry Bowers’ bid for President of the United States for 2016.

Aside from a long career in the United States Air Force, Kerry has been actively involved in communities and states where he and Deb have lived. For the last several years as volunteer State Director for Americans For Fair Taxation, AFFT, and before that as Co-District Director for the Panhandlle District of the Florida FairTax Education Association, FFTEA. As a supporter of the FairTax myself, this is where and how I met Kerry and Deb.

Kerry Bowers is not only a man of principle, a believer in the Constitution and Bill of Rights, but a humanitarian too. His platform on more topics than any other candidate dare shake a stick at are available, right now, on his website KerryBowers.com. Your path to Restoring America’s Blessings starts there. Read his platform. It isn’t a laundry list of complaints and finger pointing. Rather, it is a laundry list of solutions. It also better equips you to ask questions of other candidates and probe what their solution may be. If they even have one.

Because of his openness and honesty, you know what you can expect when you vote for him in a primary election, then hopefully in the 2016 general election. He shows you where his fiscal priorities are by showing you his proposed budget for 2015. Ever seen another candidate do that? Then there is our current president who won’t make one. There’s no political smoke and mirrors with Kerry Bowers. You can expect a thoughtful and constitutionally based opinion or decision on any topic. He believes in the power of the people as opposed to the power of the government. He sees, like you see, an oppressive government now. A government that is holding America back. He knows the key to more and better paying jobs, economic recovery, and the return of, and to, family values is in reforming more than just the tax code. It must also include reforming the government. Or as he puts it, Restoring America’s Blessings.

As he states in this video, he is setting the standard for the presidential candidates of 2016. In my humble opinion, you owe it to your family and our country to visit his website and check him out.

Not surprisingly, some are saying the girl didn’t die. That the story is made up. Also not surprising is the fact that no one is denying that Islam condones selling your children to be some pervert’s bride.

Feeling hopeless? Feeling like you’re owed something? The ‘politics of hopelessness’ may be the reason.

Not that it will change a thing, but here’s a little mental exercise to see if you can tell who the adult in the room is. Of course, many people knew who the adult was. He just didn’t win.

OBAMA: Governor Romney, I’m glad that you recognize that Al Qaida is a threat, because a few months ago when you were asked what’s the biggest geopolitical threat facing America, you said Russia, not Al Qaida; you said Russia, in the 1980s, they’re now calling to ask for their foreign policy back because, you know, the Cold War’s been over for 20 years.

OBAMA: So, what — what we need to do with respect to the Middle East is strong, steady leadership, not wrong and reckless leadership that is all over the map. And unfortunately, that’s the kind of opinions that you’ve offered throughout this campaign, and it is not a recipe for American strength, or keeping America safe over the long haul.

Listen to Romney on Putin, recalling Obama telling Medvedev to tell Putin that he’ll have more flexibility after the election.