You know what’s coming when the two French Republicans (as Mark Levin affectionately calls them), Sens. John McCain and Lindsay Graham, are summoned to The White House for a little back-scratching session. Ostensibly for President Obama to make his case for a military attack on Syria. 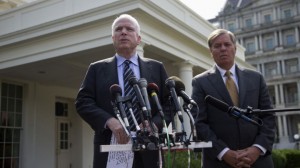 And what they came up with is no reason to use our military in Syria’s civil war.

A vote against strikes to punish Syrian President Bashar al-Assad for alleged use of chemical weapons, officials argue, could undermine Obama’s standing in the Middle East as his administration seeks to deter Iran from obtaining nuclear weapons, broker peace between Israelis and Palestinians and stabilize a region already in turmoil.

“A rejection of this resolution would be catastrophic, not just for him but for the institution of the presidency and the credibility of the United States,” Senator John McCain said after meeting with Obama at the White House on Monday.

I’m not seeing any direct threat to the security of the United States, the only reason to use the military in a foreign country. That is, if you take your oath of office seriously. Besides, it’s already too late to save our standing and credibility around the world. The proper response is to suck it up and deal with it. Learn your lesson the hard way. It’s what happens when an amateur and ideologue is also Commander-in-Cheif. Aside from there being no national security threat, by their own admission now, our military men and women don’t wear the uniform to die for flippant remarks made by their Commander-in-Chief.

The United States military is not to be used as a U.N. replacement, world policeman, or custodian for countries involved in a civil war. Like I’ve said many times before, it’s their civil war. And the only way it will end is if one side wins and the other side loses. Only then will we know what kind of State we’re dealing with.

McCain and Graham must have allowed themselves to either be hypnotized by Obama, or they are among those Republicans that reflexively cave under fear of the demagoguery to come if they buck the President. I’ll go with the latter. Demagoguery that is coming to the party no matter what they say.

It’s yet another example of caving for the sake of the party of being liked, and for appearing bi-partisan with the most partisan president in history. The Constitution be damned. A foolish behavior that never advances the interests of Republicans and, a lesson never learned.

One thought on “No To Syria ‘Save Face’ / Ego War”