Egyptian security forces have arrested the top leader of the Muslim Brotherhood, pressing a crackdown on his group. Saudi Arabia, Kuwait and the United Arab Emirates know who the enemy is, and have already sent over $12 Billion to support Egypt’s military, who is taking the fight to them. The U.S. position under 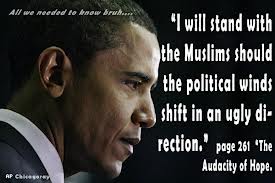 He won’t say releasing Mubarak, who he help to overthrow, is good. But does say that Morsi (Muslim Brotherhood) should be released. Won’t say a peep about the war on Christians in Egypt by the Muslim Brotherhood. Where Egypt’s neighbors have stepped up financial support to Egypt’s military to take the fight to the ‘Hood, to the tune 10 times what the U.S. was committed to, Obama finds himself on the wrong side of the fight, if for no other reason than not being in the fight.

What we have here is the Nobel Peace prize recipient who manages to make the United States the laughing-stock of the world while at the same time alienating the United States from our friends and allies in the region.

If there’s anything more the President could do to make the United States irrelevant on the world stage, I’d like to hear it. For the first time in his Presidency, he has finally come upon an instance where ‘voting present’ isn’t an option, and he hasn’t the courage to take a stand. It’s what ‘leading from behind’ gets us.

As a Pensacola resident, have you grown tired of the never-ending hand-wringing over doing something that will increase tourism, prevent young people from having, and wanting, to leave town to make a living, and of the politicians catering to deep-pocketed special interests to no one’s benefit except the politician and his special interest, aka contributor? Let’s try something different.

How about we start with something that will enhance our area for everyone? Beginning with the letter “S”.

Scenic Highway is an area that has been neglected for so many years that there’s no scene anymore. Out of 11 miles of it, there’s maybe a half-mile left, measuring small patches of open view along the way. The area has been left to overgrowth of wild nuisance trees and other invasive growth that have taken the scene out of Scenic Highway. This didn’t happen overnight.

Did you know that there is a Scenic Highway Foundation? They see the problem as I do, and have received no cooperation from the City of Pensacola to fix it. As they see it . . .

One of the major problems along Scenic Highway is non-native invasive plants. These plants are a threat to the highway corridor’s natural landscapes because they can alter native ecosystems by outcompeting, shading out, and sometimes physically overwhelming, native plants. So invasive plants threaten native plant diversity, but also they provide fewer habitats for beneficial insects than natives do, and many native birds depend on these insects to feed their young. On the bluffs, invasives cause the additional problem of obscuring views of the bay, making Scenic Highway less scenic.

I’m not one to criticize without offering a solution. Get rid of the non-native vegetation. And for control of erosion, replacing where necessary with native plants like the SHF recommends. Remove the junk/wild trees that obscure the view at street level. Topping off, as in chopping off, those trees at street level that are rooted on the hillside leading down to the bay. After that, keep up the highway so that it will not be overgrown again. Then residents and tourists will be treated to the natural beauty that Pensacola has to offer. It would make Ladybird Johnson proud.

Next on Pensacola’s to-do list, and another thing that didn’t happen overnight, is to find the source(s) of the fecal bacterial contamination that has plagued Bayou Texar for decades, causing the Health Department to close it for use and human contact several times a year. Getting the Shit out of Bayou Texar has been on my radar since November of 2007. A lot has happened since then. But nothing to fix the problem. Just more Bayou closings by the Health Department and lip service from City Hall.

I have challenged the Emerald CoastKeepers, a local group created in 1999 by Mike Papantonio (local lawyer and Lefty talk radio host), to address the issue to no avail. Their focus on environmental issues is suing corporations with deep pockets instead of advocating for clean water in Bayou Texar.

I refer you to two links here on The Lunch Counter that give a good summary of efforts made to affect positive change. All to no avail. Both posts, Cleaning Up Bayou Texar No Longer A Priority and Mayor Hayward’s Town Hall Tonight condense the issue to who said what, including a comment from Doreen Glennan, a prospective newcomer to the area.

For brevity, I urge you to follow the links provided in the posts mentioned above. A complete summary of all my research on this subject can be found HERE.

Since Mayor Hayward’s tenure, the reporting from the Health Department has been sanitized. What used to be described as fecal bacteria is now called simply “bacteria,” and the posting of signs at the boat ramps to warn the public was discontinued. There’s nothing to be gained by ignoring the nature of problem, except maybe to disguise the truth and not embarrass the new Mayor-based City government while outside advertising campaigns designed to attract tourists and industry are running. I don’t know. To quote my favorite former Secretary of State, “what difference, at this point, does it make?”

A gentleman named Al Garza used to advise the city on matters like this. After talking to him though, it seems his “solution” is to do nothing. That’s not acceptable. What should be done is to contract again with a scientist or organization qualified in determining the source(s) of the fecal contamination, like Dr. Richard Snyder at UWF or some other entity. And, see it through to completion.

Mr. Garza seemed conflicted between the Shit in the water and the chemical contaminants in the sediment of the Bayou. As though the fecal contamination could not be solved without dredging the bayou. And, he said, dredging the bayou would cause more problems by stirring up the chemicals. I’m not a scientist, but seems to me that whatever “problems” would be created by removing contaminated sediment would be solved by the natural flushing and depositing of new sediment that is not contaminated. And it wouldn’t take decades for it to repair itself. Long term, it would be repaired and we won’t have to tout the new Chamber slogan . . .