What a difference a day makes. Yesterday, Secretary of State John Kerry (who served in Vietnam) gave a bold speech about a military strike in Syria to punish the Assad regime for ostensibly carrying out the chemical weapon attack outside Damascus last week, to hopefully deter them from using them again, and to hold them accountable.  The world was abuzz about an impending attack within hours or days. 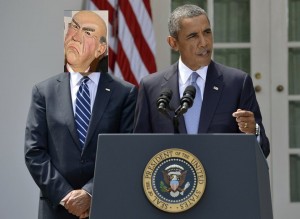 Today, the Valerie Jarrett wing of the White House set the stage for President Obama to perform in the Rose Garden to say how he has made up his mind to teach the Syrian regime a lesson, and now is willing to wait until Congress gets back from vacation, Sept 9, 2013, to make his case to them. This, after saying he could act without their consent. In the same 24 hour time period, the crises went from “will take” to “should take” military action. Yet, there is no urgency to call a special session of Congress to handle the “crisis.”

Keeping in mind that he still did not make a compelling case that our security interest are in jeopardy that would need military action inside Syria. Instead, he is hanging on to the notion that the United States has to be the policeman of the world and custodian of a country deeply involved in a civil war. That’s not in our Constitution.

Result? Israel and every other ally of the United States knows that we, and they, are dealing with an amateur as a head of state. One that can’t be trusted. First by the show, and that’s what the Rose Garden performance was. A show. Standing at the podium and looking over, and speaking to, trees and Secret Service Agents in a raised voice. You know, like he does in college campus auditoriums and union halls. With his trusty side-kick, VP Joe Biden, at his side.

And for all that he said, it could have been done from the Oval Office, in a calm and normal voice, to announce that he recognizes he should consult with congress and that’s why he is calling them back from their summer vacation to deal with this important matter. In fact, he wouldn’t have needed any cameras. Just a press release announcing his decision to get congress in gear. At least that way he would not have come off as a Commander-in-Weak.

Makes one wonder whether Sec. Kerry is part of the same administration? Would like to know how much “in the loop” he’s feeling today.