There have been times with this blog software when comment features have been turned off. Not by myself, but some quirk in the software that the WP people don’t seem to acknowledge. I just went back to check the comment settings again, only to find that the stink’in box that says ‘commenters must be signed in to comment’ was checked. That means that no one can comment since you are not signed in.

That is not the way I intend to run The Lunch Counter. THIS IS.

But it does explain why there hasn’t been a comment entered in quite awhile. That checkbox is now unchecked. Again.

The comment feature is supposed to be set so you can comment on your first visit without having to go through any sort of registration BS.

Sorry for any inconvenience this ‘feature’ may have caused you. If you find that the problem has resurfaced, I’d appreciate your letting me know using the email form on the ABOUT page.

Most people I’ve heard comment about President Obama’s speech at what was supposed to be a memorial service thought that what the President said was fitting and appropriate. The only thing that turned off people, including myself, about the event was that the crowd there treated it more like an event than a solemn memorial service.

“I will say that I read the speech several times and thought that there wouldn’t be a lot of applause if any. I think many of us thought that. But I think there was a celebration, again, of the lives of those who had been impacted. Not just at that grocery store but throughout the country. And I think that, if that is part of the healing process, then that’s a good thing.”

There is a reason too why the audience got pumped up like it did. What I don’t see a reason for is why anyone in the administration, including Robert Gibbs was surprised? What is even more amazing is how the [APPLAUSE] sign on the jumbotron went totally unreported if not unnoticed by the media. 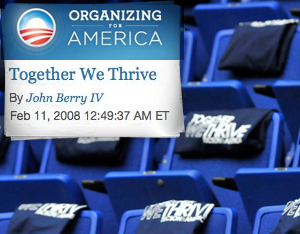 The jumbotron had the President’s text of the speech on it. OK. Including an [APPLAUSE] prompt. What? Here’s the picture of that, and the story that goes with it. 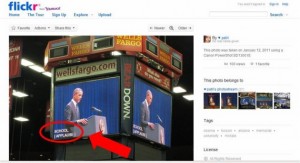 In the least reported story with the largest audience possible, try this. As to why the service happened when it did you have to consider the time it takes to get the t-shirts printed. You know, the ones that were put on the seat-backs. The message ‘Together We Thrive’ came from Obama’s Organizing for America website. The ‘event’ was planned more as a political rally for Obama than a memorial service for the victims, survivors, and their families. The motivation? Let’s just say, like his former chief of staff said, you don’t want to let a crisis go to waste to advance your political agenda. Or in this case, your ratings in the polls.

For argument’s sake, everyone who thinks that the media would have turned their heads if an R were president raise your hand.