That is how CNN described the Obama administration’s reaction to the upheavel in Egypt today on the Wolf Blitzer show. By now, it should become painfully obvious to the administration that the media can no longer carry their water when there are such big holes in the buckets. It is quite a shift from just two days ago when Obama adviser David Axelrod told ABC’s Jake Tapper how the president has been engaged with Egyptian President Hosni Mubarak from the beginning. Not to worry, that he has been on top of things for the last two years.

If the administration has been so engaged for the last two years, how could this event have caught them by surprise? They didn’t see the clues? Obama voting PRESENT on Egypt isn’t working.  The media is not yet calling the administration incompetent, although I am, but the fact that they can not longer ignore the contradiction shows they are looking out for their own survival now, instead of his.

He was on the wrong side of the fence when Iran had their political uprising. Now he has to play catch up in Egypt, and the Egyptian people are not fooled.

Another story that has not been reported in the U.S. media, if you want to connect some dots, is the unrest in other poor and mostly Muslim countries like Yemen, Tunisia, Lebanon, and Jordan. Andrew McCarthy has a pretty good idea for why we are seeing what we are seeing.

Al-Qaeda seeks to spread Islam by brute force. The Muslim Brotherhood and its American confederates – CAIR, the Muslim American Society, the Islamic Society of North America, etc. – agree with al-Qaeda on the endgame but part company on methodology.

Was checking to see what Saudi Arabia’s take on what is happening in Egypt when this headline caught my eye. You will find this article in their digital version of the Saudi Gazette dated 1/31/2011 on page 4. See screen grab below. Couldn’t find it in the regular online version. 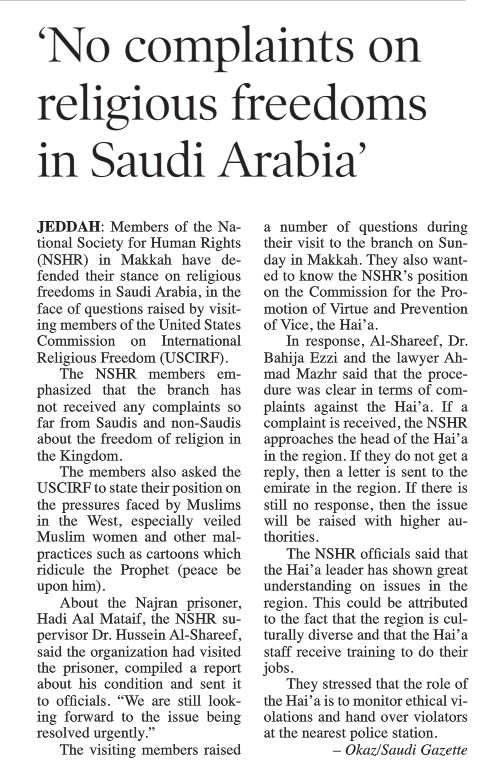 For a country that won’t let you bring a bible into the country or wear a crucifix or have a Christian church within their borders, you have to wonder just what kind of complaints they might have?

I guess it depends on what they mean by complaint? Maybe it means that no one who has complained has lived long enough to fill out the paperwork?

If building a trophy Mosque within yards of where 3,000 people were murdered in New York City is within the laws in the United States, then I have an idea. What is the procedure in Saudi Arabia to get a building permit in Mecca. I propose building a religious mall there. Complete with places of worship for Judaism, Buddhism, Christianity, Hinduism, and Jainism. No mall is complete without a food court. How about an AYCE rib joint?

A week after the rioting in the streets of Egypt, some of the conditions that the Egyptian people have been living under are only now beginning to dribble out. Like their economy sucks, and has been that way for years.

Who deserves the thanks, or in this case, the blame for the news blackout of the situation there? According to Dave Axelrod, President Obama has been involved with Mubarak since he has been president. So why are we just finding out about this now? And what other countries in the Middle East are on similar shaky ground?

The unemployment rate for college age up to 30 is reported as being anywhere from 25% to 75%. The highest nbr is from an Egyptian being interviewed on TV. The lower nbrs are from 2-3 yr old data I culled from the net and most of them seemed to be in the 35-40 % range. The 20-something woman who was interviewed said that the unemployment is so high that kids are not going to college. They say ‘what’s the point’ with unemployment so high?

The rioters are, for now anyways, turning against the government and its lack of democratic values. There are some Islamic extremist groups taking advantage of the situation by breaking their jailed jihadist buddies from prison, but reports so far are more of a call for Mubarak to step down, and for more freedom and democracy to take hold. Of course, most of the world would like to see that happen too.

With the economic situation there as dire as it is, there has been looting and destroying of artifacts in Egypt’s many rich museums. I can understand looting for resale in economic despiration. But I don’t understand destroying any part of Egypt’s rich history. As teed off as the people may be at their leader, why would they take it out on their thousands of years of rich history? That makes no sense unless perpetrated by the jihadist-types. Remember the Taliban blew up a several thousand-year old Budda that was chiseled into the side of a mountain in Afghanistan?

There’s just no place in civilization for animals, pigs like that. No offense to pigs.

Sen. Saxby Chambliss [R-GA] introduced the FairTax in the Senate January 25, 2011. Currently there are 5 cosponsors:

To contact your Senators and Representative go to:  http://www.contactingthecongress.org/