The role of skeptic – the one who asks the questions, the one who demands answers – is generally a lauded role in modern society. At least .. as long as there’s a Republican on the hot seat. But in climate circles, they have another word, a pejorative term, for skeptics: deniers. The church of global warming has no tolerance for heresy, and even less for probing questions or investigations. And so it is that the journalist Phelim McAleer was denied press credentials for the UN Climate Change Conference taking place in sunny Cancun, Mexico this week.

Christina Figueres, the UN climate chief, launched the annual climate change meeting in Cancun in Mexico, asking negotiators to strike a “compromise” and weave together elements of a solid response to global warming by drawing inspiration from the Mayan goddess of “reason and creativity.”

And, more talk of the need to transfer money and technology under the belief that the United Nations can adjust an imaginary global thermostat by moving vast amounts of money from one side of the earth to the other, if only the other side of the earth will go along. Guess who from? Leaving the rest of us in the dark.

Pensacola, fasten your seatbelts. JB is coming to town. If you’ve never heard about Joe Bonamassa, then you haven’t been keeping up with the Blues. Well that, and you haven’t been reading The Lunch Counter either.

At any rate, the best local review, or preview, of Joe Bonamassa’s show at the Saenger Theater tomorrow night, Dec.1, can be found in the IN Weekly in a piece called Tangled Up In Blues.

Why is it that if I take a thumb drive full of proprietary data off of the premises it is a leak. But if I take a TV out of Best Buy it is stolen?

This isn’t a stolen TV officer, it was leaked.

Point is, why isn’t Bradley Manning charged with theft, and the WikiLeaks guy charged with dealing in stolen property and put behind bars. Along with Michael Moore.

Movements of troops in South Korea and ships in the Yellow Sea are part of long-planned exercises and shouldn’t be seen as a response to North Korea’s Nov. 23 attack on Yeonpyeong Island, the commander of United Nations Command said today.

“Media rhetoric from North Korea, along with images of [South Korean] forces moving on the peninsula may give you a misperception of efforts on the peninsula,” Army Gen. Walter “Skip” Sharp said in a community message aimed at Americans living and serving in Korea. 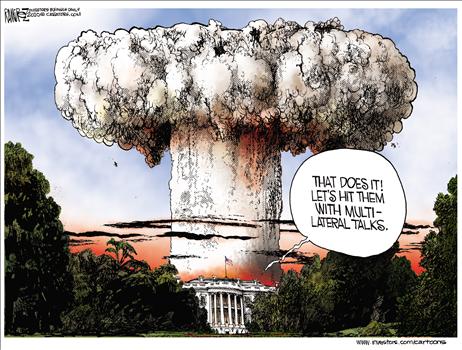 There are a lot of stories out there about an out-of-control TSA when it comes to their new screening techniques. One was a man

being threatened with a $10,000 for refusing to go through the gauntlet and left the airport. What? You get fined for changing your mind and not flying?

John Tyner, 31, said he was told he could face a civil lawsuit and a $10,000 fine for leaving the screening area before the security check was complete.

It is crazy stuff like this that begs the question, just what kind of police power over travelers’ behavior does this group of government agents have? And, why is it not published or put out there so travelers can make their own informed decisions as to whether or not they want to object, fly, or drive?

There were reports where a woman wore a bikini and said ‘you’re welcome to see what I have under there if you want.’  And a guy wore a speedo.  This is hilarious, and a non-violent way to protest the politically corrrect security theater directed by Big Sis and produced by the TSA.

I mean, surrendering yourself to a pat down and having a little fun isn’t against the law is it?

Spread the Word, Not the Wealth

Communism, it is often said, will work under the proper conditions. Though it might fail in a big country with millions of disconnected individuals, it should work in a small community of relatively close-knit comrades, who would thrive under a system of shared burden and harvest.

If you think that successful communism is small communism, the experience of America’s first settlers should dispel any romantic notions you may harbor on the subject.

Plymouth Colony, a small community of settlers struggling to survive in a new land, learned about the benefits of private property the hard way. When the colony began in 1621, all the goods and products were held in a “common stock.” All were to contribute equally and share equally in the community’s bounty—or lack thereof. The governor of Plymouth Colony, William Bradford, recorded the experiment of communal living in his journal. As he explains, there was little harvest and much dissatisfaction. Young men objected to working for the benefit of other men’s wives and children. The strong objected that they received the same amount of food and clothing as the weak. The older men objected to laboring the same amount as the young. The women objected to performing household chores for men other than their husbands, deeming it “a kind of slavery.”

In response to the dearth of crops, starvation, and overall miserable condition that communal living had produced, Bradford introduced a system of private property in agriculture. He assigned “to every family a parcel of land, according to the proportion of their number, for that end, only for present use (but made no division for inheritance) and ranged all boys and youth under some family.” This new system of private property proved prosperous and enlivening. Men, women, and children no longer thought labor to be tyrannical and oppressive, and instead became industrious stewards of their individual plots of land, resulting in bountiful harvests.

From Plymouth Colony’s transformation, Bradford concluded that communism was incompatible with human nature. It is vain to advocate that “taking away of property and bringing in community into a commonwealth would make [men] happy and flourishing. For this community (so far as it was) was found to breed much confusion and discontent and retard much employment that would have been to their benefit and comfort.”

It only took Plymouth Colony three years (and several bouts of starvation) to clarify that pilgrim socialism was a failure. Equality is not desirable when it means equally starving to death. This Thanksgiving, as we celebrate family, and friends, and the blessings of this life, let us also recall our other inheritance from the Pilgrims—that of private property.

The above was graciously lifted from The Heritage Foundation.

Audio file: The history of Thanksgiving.

Is the TSA making us safe? Have they ever caught a terrorist entering a gate? Unless you live under the overpass in a Kenmore refrigerator double-wide cardboard box, you’ve heard all the attention that the new screening techniques has been getting in the news lately.

It is interesting to me, if not puzzling, to note the alternate universe of opinion about it. From a political perspective, there seems to have been some sort of role reversal. The hawks on the Right, who one would think would embrace this crotch grabbing of  airline passengers, back away from it. Not only because they think there is a better, and less intrusive, way to accomplish the same goal, but also because of Constitutional protections  and privacy rights that are being violated.  The pacifists on the Left, who one would think would have a cow at such invasions of privacy (especially if the president was an R), generally don’t see any problem with feeling up your wife, daughter, or 5 year-old son. Considering the terrorists have hidden explosives inside the body orifices, what’s next for the TSA?

Responding to Alex Jones’ assertion that the TSA’s actions are akin to what the Nazis did in Germany during the 1930s, Ron Paul said that we long ago capitulated on “showing our papers” and now routinely provide Social Security numbers to employers and show our government issued driver’s license as an accepted form of identification. “Now the government wants us to show them our genitalia and they want to take pictures of us and put their hands into our pants,” he said.

How did the Obama administration’s TSA and Homeland Security get to this point? I think Ann Coulter nailed it in this one sentence, ‘Only because the terrorists are Muslims do we pretend not to notice who keeps trying to blow up our planes.’

(The rumor that Rep. Barney Frank (D-MA) went back in line after being screened has not yet been confirmed.)

The Korean war was never won or finished. There was a ceasefire signed on July 27, 1953. Now that North Korea has broken that ceasefire agreement, does, or should, that mean that the war is back on?

Air Force Chief of Staff Gen. Norton Schwartz weighed in on the situation on the Korean Peninsula this morning, telling reporters that while American fighter jets remain on their normal alert status, the U.S. has plenty of firepower in the region to deter North Korean aggression.

No doubt that the U.S. has the capability to ‘deter North Korean aggression.’ Also no doubt that this is Kim Jong Ill’s test for President Obama.

And in the ‘you gotta be kidding’ category, the Afghan government and its Nato allies were duped into holding peace talks with a man posing as one of the most senior members of the Taliban leadership, it was revealed today.