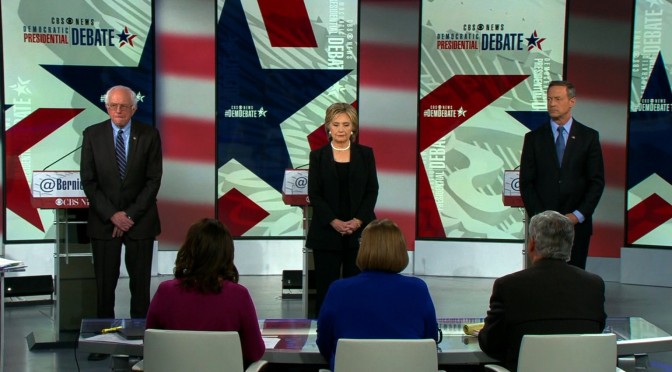 Realizing that not many people will take time out of their weekend to watch the CBS sponsored Democratic Debate, and, realizing that the DNC really doesn’t want these three to be seen or heard by a wide audience, and, realizing that CBS won’t be replaying the debate like the cable news networks do, I took the time to watch it on YouTube. It boils down to this.

All are in agreement that the U.S. should take in 65,000 (for starters) refugees from Syria. They also say “with proper screening” to assure that we are not importing terrorists. But since that is impossible to do given the circumstances, none of them are saying NO, not here. There is this knee-jerk reaction for taking Syrians, not only out of their country, but off of their continent and here into the United States.

They fool themselves, or just continue to lie to you, that they will vet these Syrians, understanding that many Americans still believe what they, and the president, say. To quote Hillary from another time, “to believe that requires a suspension of disbelief.”

There is unanimity in holding back military power against ISIS. All refer to the winning strategies of past wars which is, killing people and breaking things, as obsolete in fighting back at radical Islamists, ISIS, or whatever moniker they use. Hillary echoed “we have to figure out how to fight the adversaries of the future, not the past.”

None of the candidates support “border security first” on the subject of illegal immigration. All of them support amnesty in some form or another for the (they say) 12 million illegals here now.

Bernie Sanders pushed the wealth envy button several times during the debate. Pointing to the 1 percenters, who already pay nearly half of all taxes collected, for not paying enough. He also wants to make $15/hr a national minimum wage. Because, he says, things are so expensive that “single mothers” can’t make it on less. So he’s calling it a “living wage.” To make his point, Sanders points to Seattle where they went to $15/hr, and said it is working well. Fact is, it is not. Since raising the minimum wage, Seattle has lost over 700 jobs because of the increase.

No one attempted to make a point to decrease costs. Instead, the focus was to increase wages to cover it. Which it won’t, and can’t. Again, the low information voters, their base, will eat that up.

Sanders did call out the administration on unemployment, by saying the real unemployment rate is 10%. Not 5%. And 51% for Black youths. Noteworthy is that fact that there was no follow-up question by anyone, moderators or candidates.

Hillary Clinton proposed a $12/hr national Federal minimum wage. Her terminology (Federal) means only for Federal workers. Not all workers. But she’s safe in knowing that the low information voters won’t catch it. She also proposes free college tuition to a point. She also proposes a $250 cap on prescription drugs. When asked (fairly) how she would pay for that, and wouldn’t the drug companies and insurance companies just pass that cost on in the premiums, she said (in a typical fascist way), “we’re going to have to re-do the way the prescription drug industry does business.” That and, raising taxes on the wealthy, a common thread by the participants.

Two of the three candidates advocated for free college. Hillary Clinton disagreed, sort of. She said it should be free to people who can’t afford it. Not free for people who can. Actually, she said she didn’t think the taxpayers should be paying for Donald Trump’s kids college education. That’s called ‘means testing.’ Sanders added a trillion dollars in infrastructure spending (I thought Obama already fixed all that infrastructure stuff, shovel ready, all that?), and all agreed that raising taxes on the rich and big corporations by changing the tax law is how they propose to pay for it all.

Hillary dodged the question about why Obamacare is so expensive and deductibles so high by praising the fact that Democrats finally got government-run health care. Not that it was affordable or better than what we had, but, that they got it into law.

Bernie Sanders one-upped the others by saying that health care for all citizens should be a “right,” and “free.”

Although the moderator did ask Hillary about her big campaign contributions from Wall Street, none of them asked her about her contributions to the Clinton Foundation from foreign governments, while she was Sec. of State.

Wall Street was a common bogeyman of all the candidates.

Bernie Sanders, when asked about Hillary Clinton’s email situation as Secretary of State, once again retorts he’s still sick and tired of hearing about them. And so, he says, the media has stopped talking about them. When Hillary Clinton was asked directly about them, and about the FBI’s investigation of her, she did not answer, but referred to her 11 hours in a congressional hearing instead.

Speaking to Bernie Sanders’ ability to get people involved and excited (hard to do with this bunch of old and white politicians) about participating in the political process, shifting to Republicans, Hillary Clinton claims the Republicans “are trying to prevent people from registering to vote.” She didn’t say who what when or where. She just threw that out there. Which is right up there with Republicans want to push grandma over the cliff demagoguery.

All of the candidates support and ascribe to the notion of Climate Change as something that requires moving money from one part of the world (ours) to another, while hurting our economy.

All the candidates support funding of Planned Parenthood.

Strong support for the “Black Lives Matter” movement from Sanders. But not so much for law enforcement. Sanders advocates taking marijuana out of federal jurisdiction and leave legalization, or not, up to the states.

Bernie Sanders’ goal, for healthcare, is to end the private health care insurance industry, advocating for a single-payer system. IE. socialized, government-run, medicine. He wants to expand Medicare to include all people. You know, that plan that is destined to go broke with the current number of participants.

Hillary said her most difficult “crisis” decision in office was advising the president on whether to kill bin-Laden. What? That’s what she said. I guess it must run in the family. Remembering how her husband had the chance to capture or kill bin Laden a few times, but did neither.

The whole Larry, Curly, and Moe show is below. No thanks to CBS for keeping it to themselves.