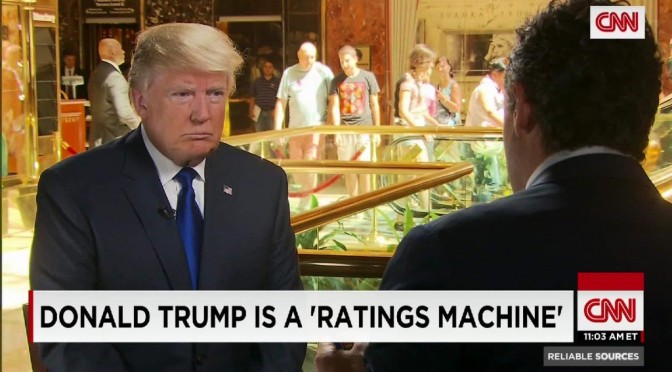 There’s one guy just tickled to death that Donald Trump is dominating the news on the subject of immigration. President Barack Obama. Anything to draw attention from participating in nuclear proliferation and providing funding to a terrorist-supporting country. And from trying to cripple the energy industry, coal specifically, and drive up the cost of electricity. But I digress . . .

Were it not for Donald Trump, what would the candidates be talking about?

Trump held a press conference yesterday. It was broadcast on two cable news channels. (Are any other candidates talking to the media? Or, is any media talking to other candidates?) At the start, Jorge Ramos from Univision, failed at imitating a BlackLivesMatter antagonist and got the spanking he deserved. Not because Univision and Trump are involved in a lawsuit, but because Ramos was acting like a spoiled child. After Ramos returned, Trump gave him more time than any other candidate would at answering and taking questions from a single reporter. Trump came out the winner in that exchange.

Later on FNC’s The Kelly File, Megyn Kelly asked Ted Cruz if he would deport an American citizen if his parents were illegals? She was speaking of an anchor baby. Instead of answering that question, Cruz gave his own answer which included words to the effect of “I’m not playing that game.”

I’ll answer your question Megyn Kelly. The answer is YES. That’s because, obviously, the family should be kept together. And if the parents would refuse to take their child with them, abandoning the child, then the kid should be taken from them as unfit parents, put in foster care, and the parents sent back to wherever they came from. And the anchor baby problem will cure itself.

Also yesterday, speaking in McAllen, Texas, Jeb Bush said, in Spanish, “I, as President, I would go to congress and change the law to give them not a residency but citizenship.” It is Bush’s belief that illegals (he and Obama call them Dreamers) deserve it. Like so many other candidates, Jeb is on that “the immigration system is broken” bandwagon.

It’s that whole “deserve” thing that troubles me. The other thing that troubles me is when people/politicians say the immigration system is broken. The only way to determine that is to enforce the immigration laws. They are pretty clear. We need a leader to demand that the laws, all of them, be enforced. No sanctuary cities, no anchor babies, no anything for illegals, except a ride back to the border.

Aside from Trump pretty much owning the media, the media is doing a great disservice to the folks by ignoring all but a select few of the other candidates. One such candidate has filed a complaint to the FEC over the media’s totally biased reporting on the field of candidates. And, he’s the only candidate so far who can show you his plan in writing. That would be Kerry Bowers.