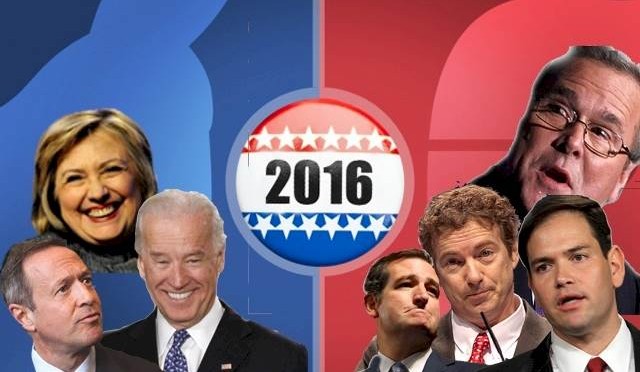 God has blessed us. He’s blessed the Republican Party with some very good candidates. The Democrats can’t even find one.

At a time when most Americans believe they are seeing the country in decline, in so many ways, and the only candidates to replace Obama who are resonating with Americans are the ones from outside the political class, the DNC and RNC have a daunting challenge.

What do Democrats have? Hillary Clinton, part of the Washington Cartel who would be Obama’s third term. More of what most Americans don’t like. And that’s only if she isn’t wearing an orange jump suit in prison for violating the espionage act. Then there’s Al Gore. Al, don’t you want to run again? Or Joe Biden. Joe don’t you want to run? You son wanted you to run.

What’s missing here? Their desire to run. It’s not in their gut to run, to ‘turn this ship around’ or to run on an Obama third term. The DNC doesn’t have a true, organic candidate with a mission. (Credit President Obama for that. He is the only imperial ruler in his party.) The only person attracting democrats is not a democrat. It’s Independent Bernie Sanders, an avowed socialist.

It’s too early to tell how this will sort out by 2016, but a republican landslide isn’t out of the question. It’s the RNC’s election to lose.