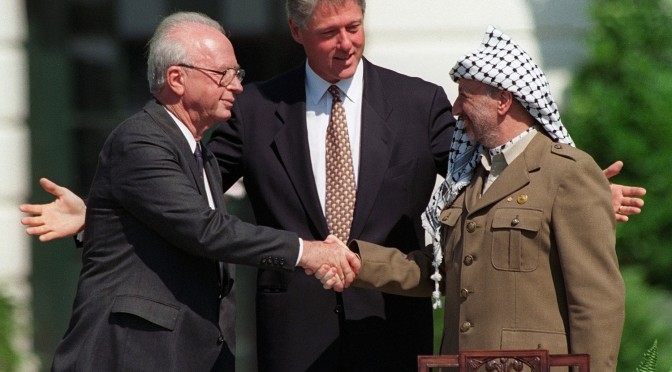 For more than four decades, Americans have waited for “peace in the Middle East.” The reason they’ve expected peace in the Middle East is because the U.N., politicians in Washington, and  the media have us all believing that there actually is a peace process going on. The unrest has been ongoing since the formation of Israel in 1947.

The truth of the matter is, and President Clinton proved the point, that the Islamist half of this phony peace process have more to gain by clubbing Israel from “the process” than they do in having peace. Peace that the Islamists do not want. They want peace without Israel.

In negotiations with Yasir Arafat, the chairman of the P.L.O, Clinton essentially called Arafat’s bluff. Clinton agreed to everything that he asked for. Instead of coming to an agreement and having peace, Arafat walked away and refused to agree to his own demands for peace with Israel.

The controlling political authority in the conflict, Hamas, still has the destruction and elimination of Israel in their charter. There is no way to negotiate that. That is why Netanyahu was right when he said there never would be a so-called two-state solution. Because the Palestinian side is the side that is demanding a one-state solution.

Netanyahu’s clarification was simply to say that he would be for a two-state solution if they had a negotiating partner, including Iran who supports and finances Hamas, that also wanted a two-state solution.  But they don’t. And President Obama has his head up his ass if he thinks peace can be achieved by negotiations when the Islamist side denies Israel’s right to exist. The media is just as irresponsible for giving the president a pass by keeping this story from being told.

Too bad President Obama doesn’t have what it takes to come to terms with that very basic fact. He is the one missing the opportunity to bring the parties together. And paling up with the enemy while chastising our ally, Israel, is not even “looking” for a path to realistic peace talks, let alone finding one. And until he does, there will never be peace, and always be a “process.”