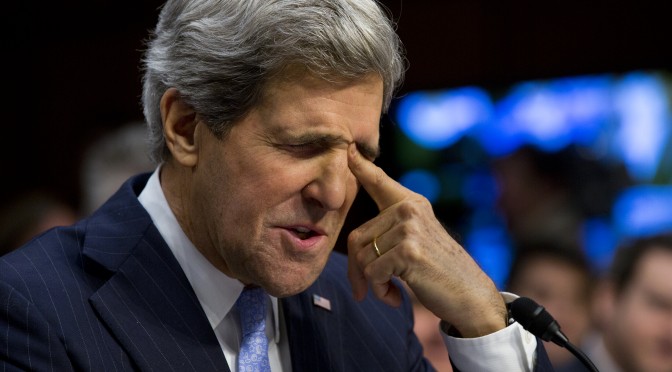 Two years ago, under the Muslim Brotherhood’s Egyptian leadership, the Obama administration was going to sell Egypt F-16 fighter jets and tanks. Then the regime change gave way to a more U.S.-friendly Egyptian administration. Mohamed Morsi was arrested, and Abdel Fattah el-Sisi was elected. And the Muslim Brotherhood was declared the terrorist organization that it is. OK fine.

Two years later, Sec. of State John Kerry, the Obama administration,  is holding up that aid. Kerry said a decision would come “very soon” on the F-16 fighter jets, tanks and other material the Egyptians say they need to combat an extremist threat operating in the Sinai Peninsula and spilling over from lawless Libya.

One would think that it would be in U.S. interest to give Egypt this kind of aid. But wait, Kerry also said he wants to certify Egyptian progress on human rights, democracy and the rule of law. Odd thing to demand of our ally, when demanding no such thing of our enemy, Iran, who routinely tortures, kills, and imprisons political prisoners and Christians every day.