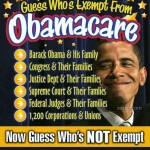 For President Obama to say (over and over again) that Republicans want to shut down the government, and accusing Republicans of a crime, extortion, he is making his usual straw man argument. His lemmings of course will believe him, and his media will say nothing to the contrary.THE TRUTH IS, Republicans want to fund the government, to keep it running, at 2013 level spending, plus whatever new has been appropriated EXCEPT for funds related to Obamacare. That’s what H.J. Resolution 62 (the continuing resolution in the House) does. It again will revisit Obamacare spending in September of 2014. It essentially, puts Obamacare on hold by giving working people the same relief as Obama gave BIG LABOR and themselves (Republicans included) in Congress.

Check it out. It’s a mere 10 pages. Then tell your representative to vote YES on it. Might also remind him, in a nice way, that you expect him to represent you and not the Democrat party or the President.