Once you get past headlines like Fox News Sees Its Worst Ratings Since 2001, and Fox News Ratings Hit 12-Year Demo Lows In January Cable News Figures, you might be curious, like I was, to see what that’s about? Come to find out, according to Nielsen Media Research, the ratings people, January marked “11 consecutive years of FNC’s dominance as the #1-rated cable news network.” What?

As a matter of fact, after the re-election of The One, I tuned out, not just to FOX, but to all of it. ‘It’ being the euphoria that the mainstream media was enjoying with the post-election burial of another Republican campaign, as well as the high of Obama’s second inauguration. It figures that the 51% wasn’t watching FOX either. They were watching everyone else. Turns out, that’s exactly what happened.

A MSNBC show Rachel Maddow jumped up from 14th a year ago to 10th in prime time. Beating FOX’s Studio B and the 11 p.m. re-run of The O’Reilly Factor. Just from reading the headlines and the progressive talking heads, you can see them jumping for joy. With the help of President Obama, they’ve finally buried FOX. Well, not.

Every once and awhile, it pays to look behind the headlines. Or just read it here. 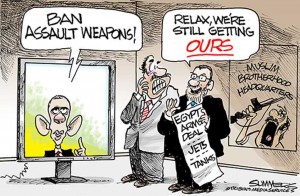