Updated 2/24/2013. A growing number of firearm and firearm-related companies have stated they will no longer sell items to states, 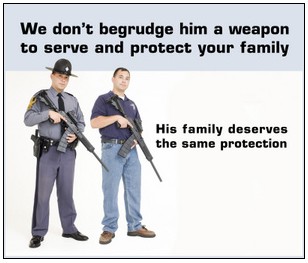 counties, cities and municipalities that restrict their citizens’ rights to own them. YES! These growing number of manufacturers are limiting sales to what law-abiding citizens residing in their districts can buy or own.

This should serve as a wake-up call to the anti-second amendment crowd. But, it probably won’t. Look for the next step to be the federal government to either attempt to suspend or revoke their license, sue the companies for exercising their rights, or to simply seize their assets like any good dictator would do, all in the name of some perverted view of discrimination.

“Police loophole” seems to be a pro-gun industry, or anti-gun control term. Sort of like “gun-show loophole” is to the pro-gun control lobby.

What is the police loophole?

There are some states, counties, cities, and municipalities in our great nation that fail to allow their citizens to fully exercise their right to keep and bear arms with restrictions such as magazine capacity or types of firearms that are widely available to citizens of other states, counties, cities, and municipalities. However, these government entities do not place these restrictions upon their own employees, such as police officers. It is important to note that we are against gun control; we are not against any particular government agency or individuals.

The folks aren’t preparing for war against law enforcement. Although you can make a case that Homeland Security is preparing for a war against Americans with their billions of rounds ammo purchases over the last year. These companies won’t do business in states or areas where there are two standards for the second amendment, or will limit their business to that which a regular citizen can buy or own.